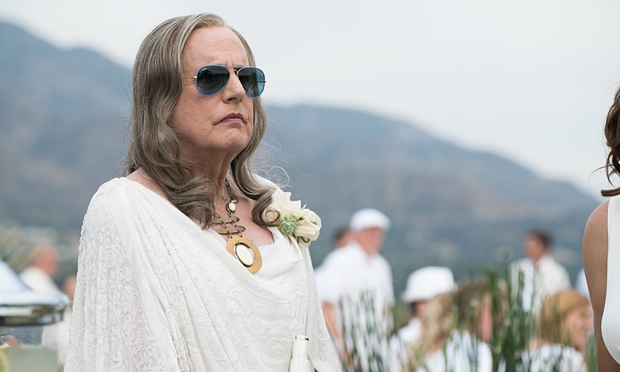 Now, I like to see a penis being chopped up and fashioned into a designer vagina as much as the next television viewer – but what a relief that transgender representation seems to have moved on in 2015. Yes, Channel 4 is still churning out those awful shock docs about “SEX CHANGE SURGERY!!!”, but these shows are starting to look increasingly silly and, dare I say it, old fashioned. With the success of Netflix hits Orange is the New Black and Sense8, both of which feature trans characters played by trans actors, not to mention British soaps embracing the trend, it’s now possible to turn on your TV and see a trans person who isn’t sitting in a hospital bed. It turns out trans people are not just sets of floating genitals that do magic tricks for fascinated viewers – they’re full-bodied human beings with bigger stories to tell.

Transparent has been one of the breakout shows of the year in the US, with Jeffrey Tambor winning both an Emmy and a Golden Globe for his role as a Californian dad transitioning from Mort to Maura late in life. But there have been moments on TV this year that move beyond transition stories. You could feel the world’s jaw drop when Caitlyn Jenner revealed herself in all her feminine glory in the summer – but why are so many people still so shocked by “men” becoming women? Surely, there can’t be anyone left who didn’t get the memo that this is possible now. At least Caitlyn’s follow-up series, I Am Cait, allowed reality TV viewers to see her begin to move away from this moment.

Even in documentaries about trans people, preoccupation with transition means there are plenty of other stories that just aren’t being told. What about the problems facing families of trans kids, whose lives are torn apart as their local communities turn on them and the press camp outside their door? I know families like that – parents of trans kids who fled in the night to avoid paparazzi.

Can you imagine if the only time you ever saw a gay person on telly was if they were struggling with the process of “coming out”? Riley Carter Millington, who is 21 and became the first trans person to join the cast of EastEnders this year, says that while the “educational side of it is important”, he’ll be glad to see the conversation moving on in 2016: “As a kid I watched videos that focused so much on transition – and actual life kind of gets lost … You need to see the normality, the reality of it.” He’s right, being trans is a rich source of real human stories – not merely because trans people are trans but because they are people. Catch up, TV.

EastEnders’ executive producer, Dominic Treadwell-Collins, says they are trying to get it right: “I feel that telly can make the world a better place – and that it’s part of EastEnders’ job to challenge viewers’ attitudes to the world.” He saysEastEnders went into the casting process with an open mind: “It was crucial to me to have a really talented trans actor playing a trans character. It’s not just about visibility, it’s about being true to the character.”

2015 has been a huge moment for trans actors themselves. Annie Wallace is a sign of the times. She transitioned 25 years ago, but until this year she played cisgender (that is, non-trans) roles on stage in Manchester, in addition to a guest role on Shameless. In 2015, she turned 50 and decided to apply for an acting workshop at Hollyoaks, organised by campaign group All About Trans. “I saw a lot of changes going on in the world and I saw that trans actors were being embraced instead of rejected and, I’ll be honest, I thought it might actually be really good for my career!” She made her first appearance as Hollyoaks High’s new headmistress Sally St Claire in October.

Britain’s welcome to trans actors feels symbolic – while trans characters, such as Hayley Cropper in Coronation Street, played by actor Julie Hesmondhalgh, have won viewers’ affections in the past, this has required careful research on the part of actors and producers to ensure they get it right. Surely, it makes sense to cut out the middle man? Trans actors will have their own insights and direct experience to work from.

What does Wallace think of trans people being played by cis people? “Given that Julie did such a great job of playing Hayley, I would never say that a non-trans person can never play a trans person.” However, now there’s an acting pool of talented trans actors coming through the ranks, Wallace says casting directors should look there first: “We’ve got some fantastic filmmakers and writers within the trans community and I think it’s time they battered down the glass ceiling and started getting their stories told in mainstream drama.”

For trans people, NHS delays are all too often a matter of life and death

Would she have found it easier to come out with the developments in TV in 2015? “I think whenever somebody sees someone from their own community in high-profile positions, whether they’re disabled or BME or whatever, then you feel that you have somebody that you can identify with, and you can say: ‘Those are my people.’”

Hear, hear – this is what we need to build upon after this year: fresh narratives that can entertain everyone, but show that trans people in the media are remarkable for their talent and their input into the stories they are helping to tell.