FOR the first time in her life, Nicola Wilson is optimistic that she can carve a productive future from a troubled past.
The 28-year-old hit the headlines when, as a transsexual, she was sent to women’s prison Cornton Vale.
Being jailed was a low point for Nicola, who helped her home city, Glasgow , host the 14th Homeless World Cup . 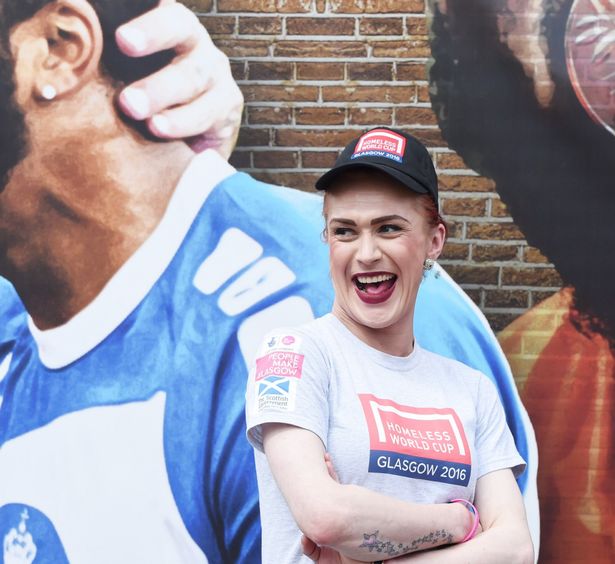 Nicola was born as Joseph and raised in Glasgow’s Easterhouse in a volatile home dominated by an alcoholic father.
Femininity was at the heart of her identity. She said: “I didn’t feel like a young boy. I was always dressing up and dancing, doing girly things and I didn’t play football.” The bullies labelled her as “gay” and a “po***er”. The taunts and the violence were relentless. She added: “I was chased and beaten up . Sometimes I couldn’t leave the house because I was so scared. At home, my dad didn’t approve either, so there was no getting away from the antagonism. My dad and I didn’t have the relationship we should have had. He didn’t accept me but I’m glad he made his peace with me just before he died last year.”

Her mother has always loved and protected her but was overwhelmed by her husband’s alcoholism and raising her family.
It was only when Nicola left home at 16 that she was able to embrace who she really was.

She spent the next two years in and out of homeless units but found some solace in having the freedom to dress as a woman. She had support from her social worker, who had been with her since she was a child, and got a job as an apprentice hairdresser. But when she got a second job as a nightclub barmaid she started to party and alcohol began to consume her life. When she was 21, she was hospitalised after a brutal assault, sparked by a feud with friends, and her skull was fractured.
After the attack, she became increasingly paranoid, drank excessively and turned to cocaine, which compounded her mental instability. She became involved in petty crime, often blacking out and being arrested for being drunk and disorderly and was “a pest to the courts”. She also tried to kill herself. Her most shameful crime was a violent assault during a drug-fuelled fit of paranoia.

Nicola said: “I’m so sorry I did it. I regret all the things I did wrong but that was the worst.”

She was sent to Cornton Vale in 2010 and uproar followed. She had lived as a woman for six years and was on hormone treatment but still had a penis. For the first three months, she was in the prison’s Ross House, a unit for inmates deemed vulnerable and in need of drug rehabilitation. She was given her own cell and could shower only when the other women had washed and been locked up. The other inmates were forbidden to be alone in a cell with her. Nicola said: “I understood there were rules and regulations that needed to be in place for the safety of the girls and myself.
That wasn’t an issue but there was such a fuss in the media and that was hard to take. I’m not interested in women. I’m a straight girl who likes men. I didn’t pose a threat to anyone.”

But her hairdressing and beauty skills soon won the women over and she worked in the prison’s salon. She said: “Once the girls got to know me, I became one of them. I even ended up doing the hair of the staff.”

On her release 14 months later, any hope that she could stay clean disappeared when her mental state deteriorated and she immersed herself in addiction. She became homeless and was forced to couch surf with friends. Nicola was again locked up in Cornton Vale, this time over charges of being drunk and disorderly.
She tried various rehabilitation programmes with little success until she was referred to Turning Point 218 last year. Nicola had become a recluse – drinking, “dressing like a tramp” and retreating to her home with the curtains closed. But a support worker from 218 went to her home and eventually persuaded her to take a path away from addiction.

The project offers counselling, addiction work, residential accommodation, one-to-one mentoring and aftercare. Nicola has now been clean for a year.
She said: “It worked for me. I wanted to be invisible but they wouldn’t let it happen. The project made me see the world through clearer eyes. I’m so grateful. I feel focused and optimistic about the future. My life has turned around.”

Nicola has since won the title of Miss Transsexual Scotland and hopes to win the UK title in August. She is studying sociology and hopes to become a support worker for troubled youngsters. The Legacy Volunteering Programme, funded by the Big Lottery, is another part of rebuilding her life. The initiative helps recruits learn new skills and gain more confidence though a programme of sports coaching and creative writing.

Nicola said: “I feel empowered. I feel I have a future and am determined to use it to help others.”

Read more at The Daily Record