A man murdered his partner and then committed suicide. These are the simplest facts we can offer about a tragedy that is both all too frequent and easily forgotten.

But the recent murder suicide in Brisbane is more notable than others for the drama it offers a jaded public, inured and indifferent to the violence women face. Various media outlets were impressively quick to report on the tragedy, and set a land speed record in the race to the bottom category in the process.

The reporting, already breathless at the unconfirmed suggestion of cannibalism, took a horrific turn when journalists turned their attention to the victim, Mayang Prasetyo, describing her as a “transgendered prostitute” and underlining her Indonesian heritage before tearing through her social media to find pictures of her. What does it say about our culture that Prasetyo was most prominently defined as a prostitute, a word considered by many sex workers to be a slur?

Perhaps these factors would be relevant were Prasetyo victim of a specific hate crime relating to her occupation, or her background. But she wasn’t. Mayang died because of a different hate crime: she was a woman in a relationship with a man who felt entitled to murder her.

Questions should also be asked of a media entitled to publish photos of her posing in a bikini. It’s not enough that journalists pick through your online photos like carrion fossicking for a strip of a meal, it’s that they have to find the sexiest one. There were other photographs, just as well-lit and in which Prasetyo was fully clothed, that showed her as the happy woman described by her neighbours. But of course, they’re not as luridly scandalous.

This is where the media must consider its use of language – the language that variously describes a murder victim as a “shemale”, “prostitute” or “hooker wife”. Every time we single out people by underlining what makes a person “different” in the eyes of many, we effectively remove them from our community and reduce her humanity further.

It’s this use of “othering” language that forms a connection in the mind of readers. Tell people often enough a murder victim was a sex worker or transgender, and readers will begin to associate both as factors for someone’s murder. When we present someone as something “other” than our conservative view, we begin to assume their failure to be like the majority perhaps contributed to their death. This then follows into the fallacy that it’s the job that kills, or the gender identity that kills. But neither job not gender identity killed Prasetyo. She did not make a choice to be killed – a man made that choice.

Likewise, the way the media handles the portrayal of the accused perpetrator when murder-suicides occur can be incredibly disturbing. News reports have called accused killer Marcus Volke an “outspoken opponent of violence against women”. It is simplistic to present his social media activity as a character reference, and deeply insulting if it’s presented as ironic. He is a man who allegedly made the choice to kill a woman and then killed himself when cornered by the police. No more, no less.

Yet, this reporting echoes previous coverage of gendered murder-suicides where murderers are described as facing great stress – an isolated rural life, tending to ill partners, bad finances – and then offers a hotline to help men (a reference to suicide hotlines is a requirement when publishing a story about suicides in Australia), but not one for the women who suffer under them (a reference to a helpline for domestic violence victims is not required by the Australian Press Council, but one wonders why editors do no make the effort to include one).

This omission particularly scorches: here’s a hotline for suicide prevention but no domestic violence hotline, despite the fact articles on the issue might actually impact the thousands of women around Australia who face violence in their homes.

At the end of the day, another woman was killed by a man. It’s another statistic showing the real terror women face: that the home is statistically one of the most dangerous place for a woman to be. And yet our media continues to salaciously victimise women, even in death. 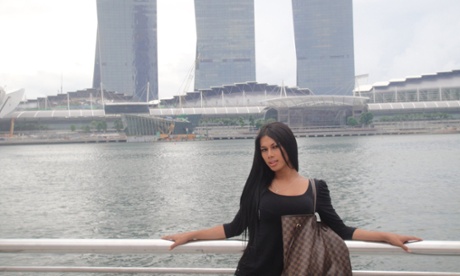