A Trans woman murdered and cooked by her husband in their swank Brisbane apartment was a “high-class” prostitute using profits from sex work to support her family in Indonesia.

Mayang Prasetyo was charging up to $500 an hour for her services, marketing herself online as a “top high-class Asian shemale’’. 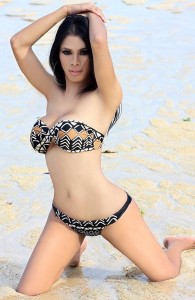 The married couple at the centre of the weekend’s grim murder-suicide had both recently spoken to family and given them no indication of problems in their relationship.

Yet friends of Ms Prasetyo said yesterday they had held concerns about her husband Marcus Peter Volke, 28, saying he was quiet, difficult to get to know and “extremely cold”.

As police continued to speak to witnesses yesterday and clean up the grisly inner-city unit, it was revealed Volke recently went to hospital with a cut hand, claiming to have been sliced by his partner. Ms Prasetyo’s mother spoke exclusively to The Courier-Mail yesterday from her home in Lampung, Indonesia, saying she was devastated at the loss of her eldest child, whom she referred to as her son Febri, the family’s breadwinner. Febri sent money home to Indonesia to support the family, including two sisters, aged 18 and 15.

She said Ms Prasetyo was “fine” when they last spoke on Thursday. Ms Sukarni said Volke, whose nickname was “Hit”, had visited Indonesia with his wife last year. He seemed “quiet” and “submissive” and had just started working in a Brisbane restaurant. Before they married overseas in August 2013, Ms Prasetyo asked Ms Sukarni for her blessing. Ms Prasetyo came to Brisbane to be with Volke but had complained of being “bored” and wanted to return home to Bali, where the couple owned a home.

Ms Sukarni said Ms Prasetyo could be “jealous” and “temperamental”. “Febri did not feel at home in Brisbane, however, he started to breed dogs about a month ago and hoped that would keep him occupied,” Ms Sukarni said. “I told him to be good with one another and not to fight.”

Ms Prasetyo described herself online as a high-class “international escort”, with listings dating back to 2011. One advertisement read “grab me now before late”, with prices ranging from $200 for 30 minutes up to $500 for an hour outcall.
One ad read: “Better in real life. Pictures are always real. Real deal pre-op functional hot TS. With a great fit and hot body to enjoy.”

Teneriffe neighbour Hamish Guinn said he first met the couple last month when he was invited to look at their dogs. “The strange little guy opened the door and said nothing to me,” he said.
“The vibe was very strange, with him just smiling an intense creepy smile at us while she tried to coax us into her apartment. Something felt off so I quickly declined the offer.”

Friends of Ms Prasetyo spoke to The Courier-Mail from Indonesia yesterday and confirmed the couple were married in Europe after meeting when they worked on a cruise ship.

One friend, who didn’t want to be named, said Ms Prasetyo had applied for a partner visa. “We were very close before; however, when Volke came into the picture she never wanted to say a lot about her relationship with him,” the friend said. “I remember him to be a quiet person … it was difficult to start a conversation with him because we did not feel comfortable. He was very quiet. He was also extremely cold, I have never met anyone like him before.

“Mayang was a cheerful person, easy to make friends … Sometime she can also be temperamental. When she is really angry she can explode too.”
Priska Geraldin, who lives in the same Indonesian village as Ms Prasetyo’s family, said she was shocked over her best friend’s death as Volke was a “nice guy”.