Maine’s most famous transgender teen is making her acting debut next Tuesday on national television.

USA Network announced today that Nicole Maines will star in an upcoming episode of the show “Royal Pains”. 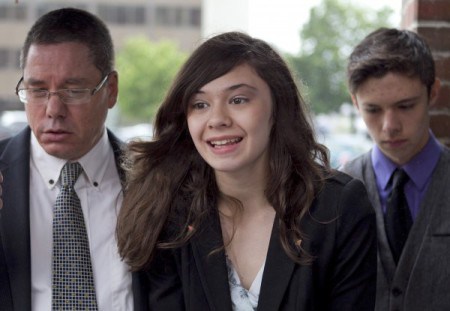 Maines, a 17-year old high school senior, made headlines when she won aMaine transgender rights case. The ruling saw the Maine Supreme Judicial Court guarantee the right of a transgender child to use the school bathroom designated for the gender with which he or she identifies.

The episode titled “The Prince of Nucleotides” — set to air 10 p.m. Tuesday, June 23 —  will feature Nicole as she plays a trans choreographer who discovers that the hormones she’s taking may be putting her health at risk.

USA Network is also airing a public service announcement about the transgender community, sponsored by a partnership with PFLAG, the nation’s largest LGBTQ family and ally organization.

“We are thrilled to be telling the story about Anna, a transgender teen, in this episode of ‘Royal Pains,” Executive Producers Michael Rauch and Andrew Lenchewski wrote in a statement sent to The Huffington Post. “Spreading the word about the complicated issues that arise in identifying as transgender and about how crucial support from friends and family and quality healthcare is, in making transitioning less stressful, seemed not only organic to our medical show, but an important story to tell. In telling this story, casting a transgender person was essential to us. The opportunity to have Nicole Maines, a transgender teen herself, who in her acting debut proved to be a very talented actress as well, was deeply gratifying. Nicole brought the character of Anna, written beautifully by Carol Flint, to life and depicted her with strength, intelligence and humanity — all traits Nicole possesses herself. We are very proud of this storyline, of the episode and of the opportunity to work with Nicole.”

Since her court case, Nicole hasn’t left the media spotlight. In November of 2014, Maines was selected to represent Maine in Glamour Magazine’s “Hometown Heroes: 50 Phenomenal Women of the Year Who Are Making A Difference.”  In 2011, she was the keynote speaker at the 2011 GLAAD banquet, and in 2012 Maines and her family received the Roger Baldwin award, the Maine ACLU’s highest award for civil right advocacy.

“Playing Anna on Royal Pains was an incredible experience and the amount of warmth and encouragement that I received from the cast and crew was so unexpected, but welcome,” Maines said in a statement published at E! Online. “Everyone’s words were so supportive and kind and they really made me feel part of the cast immediately, and made my very first television acting experience a pleasure—one I will remember forever.”