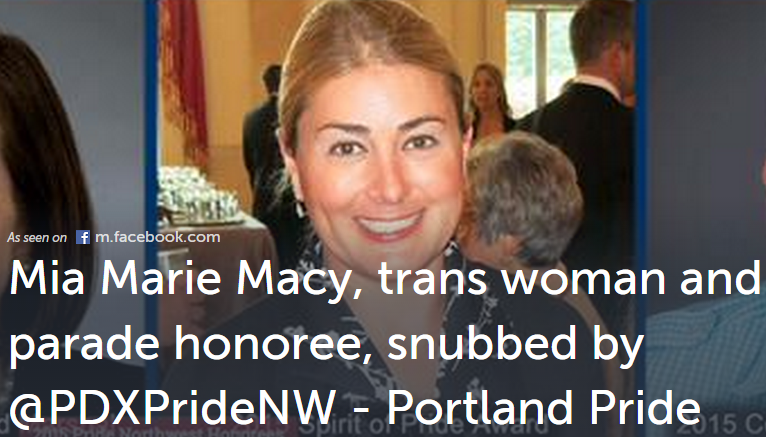 Mia Macy arguably the most important trans activist in recent times was treated as a persona non-grata by the 2015 Portland Pride officials.

Pride and Prejudice: The Erasure of the ‘T’ from a Movement We Started.

We are midway through Pride month and for the transgender community, the celebration that our community started has seen its ups and downs, but as we move closer to the end of what was once known as “Gay Pride,” the ‘T’ is once again suffering from erasure and in many cases, the erasure is perpetuated and pushed forward by local LGB[t] organizations raising money off the backs of people who are transgender while holding that same community at bay.

Organizations in Minnesota, Texas, and Oregon have all fundraised off the backs of people who are transgender only to disassociate themselves with the community, minimize their existence or insist on dictating their agenda. Strangely during Pride, these organizations are our closest “allies,” but when the “The First Pride was a Riot” parade signs are recycled, it seems as though we are once again sitting at the kids table with too few chairs and not enough plates. 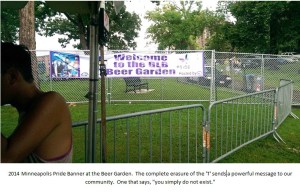 We’ve seen wins this year at local Pride events; Janet Mock was the Grand Marshal of the annual Utah Pride Parade, and locally in Minneapolis, Andrea Jenkins, curator of the Transgender Oral History Project at the University of Minnesota and Grand Marshal of the Minneapolis Pride Parade recently told Planet Transgender, “So far in 2015, nine Trans and Gender Non-Conforming folks have been murdered in the United States. It is not enough to invite us to your parades or to give awards to individuals like myself, we must make a commitment to full equality and equity for all Trans people everywhere.”

As Pride marches forward every weekend, things, however, did not go that well in Portland’s PDX Pride, where the Grand Marshal of the Trans-March Pride Parade was a cisgender person while transgender activist and public figure Mia Marie Macy was relegated to the end of the parade with no signage, car or representation.

Planet Transgender reached out to Mia Macy about her experience at PDX and she had this to say, “From the moment my wife and I (they knew she was coming) arrived we were treated like an afterthought. From bringing a smart car with one seat, an option to ride in a car full of drag queens, taxi or walk I was humiliated. As a trans woman that has fought against the negative stigma of society, for our rights and educate others that trans is not drag, sitting in a car surrounded by drag performers is one of the most insulting request.”

She continued, “I had to resort to showing staff my phone with their website and my face on the homepage to try unsuccessfully convince them I was to be allowed to stand in shaded backstage area awaiting an award they asked me to come and receive. Multiple times throughout the day the president of Portland Pride had opportunities to make a difference and didn’t. After years of fighting for our equality, this was the first time someone recognized my efforts and it was supposed to be special. Instead, I was an afterthought, humiliated and embarrassed.”

Sadly, Ms. Macy issued a youtube video explaining the event in great detail and announced her exit from public life. Another powerful voice in the trans community has been silenced by an organization that claims to be ‘T’ inclusive.

The responsibility of any LGB[t] organization is to serve the greater queer community on an equal playing field and unfortunately, the trans community is no stranger to being the bargaining chip for the greater LGB community. The biggest rift between the communities began with ENDA when our right were bartered away to appease the Republicans. This only adds to the erasure of the trans voice and it feeds contempt towards us resulting in suicide rates among trans people up to twelve times greater than the general population.

This last week, transgender teacher Karis Anne Ross committed suicide not as a result of the bullying she received from students, but from more than ten years of abuse by the Milwaukee Public School district and its administrative staff. Her suicide note named names and those who were responsible, she noted that her written complaints to MPS superintendent Dr. Darienne Driver over the last ten years of her life went unheard.

LGB[t] organizations are fighting for their own right to exist. This month, the US Supreme Court will rule in favor of gay marriage and the major goal of the so-called “gay agenda” will be accomplished. Donations are down as the gay community heralds the end of a life long struggle while proclaiming that “the fight is over” and LGB[t] organizations need to find additional funding, and with the transgender merchandising machine kicking into high gear this year, our community is prime for the picking. 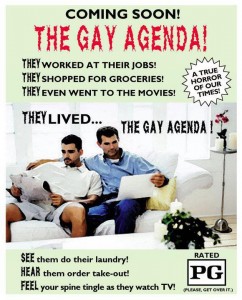 But the fight is just beginning for those of us in the trans community; as gay men all over the country are fighting for their right to share a slice of pizza in Indiana, more than 20 bills were introduced in statehouses this year specifically aimed at people who are transgender. One doesn’t need to look further than the 2014 apology to the transgender community by the HRC or even the recent reports out of the HRC of the inequitable treatment of HRC transgender staff.

Although recent reports show that almost 22% of peoplenow know a person who is transgender [up from 17% last year and 8% the year prior], this still compares to a recent Pew Poll that stated more than 90% of US residents knew a person that is LGB. That is a staggering difference and having major LGB[t] organizations continue to ignore our basic human rights only sets our community back further.

These organizations are no doubt staunch LGB supporters and collectively they are able to rack up quite a few accomplishments and push the “gay agenda” forward, but in order to include the [t] in your organizations mission, one truly needs to understand the issues placed on our backs and referred to as “trans issues” and stand up to fight for our rights.

Activist and Author Kelsie Brynn Jones told PlanetTransgender, “With each Caitlyn Jenner that comes out, public opinion swings further towards acceptance. hopefully society will hear us and come to understand that access to healthcare, equal rights, and a right to live free from discrimination, should be guaranteed for all.”

Kelsie is right, as regional LGB[t] organizations are concentrating their efforts on making sure I can urinate in the bathroom of my choice, they are overlooking the macro-aggression pushed on us. Unemployment, underemployment, poverty, access to healthcare, the suicide rates, the murder rates and our inability to secure the same employee protections that are legally granted to the LGB community.

Regional LGB[t] organizations need to clean house in order to become more trans inclusive and start focusing on hiring more transgender staff, listening to our voices and allowing us to dictate our own agenda. Any true ally knows that they are the foot soldier of the marginalized community and not the leaders. We are not going away and we are only getting stronger, it’s time these organizations asked for our participation before we demand it by hitting their donor base.