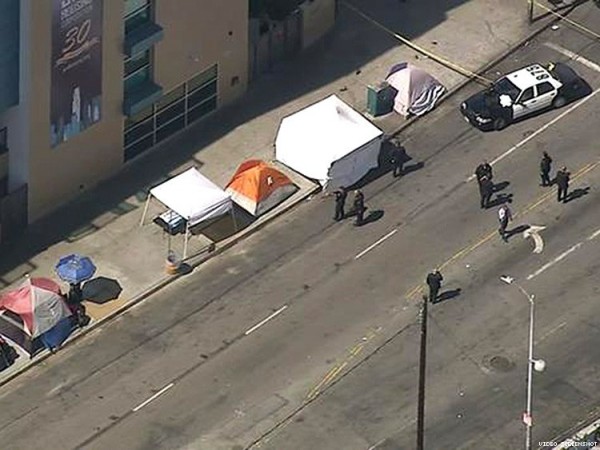 A 32-year-old transgender woman of color was shot and killed Wednesday at approximately 1:20 p.m. within the Skid Row area of downtown Los Angeles, according to local news station KABC-TV.

Officer Tony Im of the Los Angeles Police Department told the Los Angeles Times that the shooting took place in the 500 block of South San Pedro Street, after the alleged gunman opened fire on the woman during an apparent intimate partner dispute.

The woman, reportedly shot in the head, was pronounced dead at the scene.

Anita U. Nelson, chief executive of SRO Housing Corporation, identified the victim as Kourtney Yochum, according to the L.A. Times. Messages sent by Facebook to The Advocateallege that the deceased used the name Quartney Davia Dawsonn-Yochum on Facebook.

“It is mind-boggling; it happened out in the open,” Nelson told the L.A. Times.

“I’m heartbroken,” Nelson said. “Our residents are traumatized, our staff is traumatized. Everybody loved her. She was very popular.”

Despite the area’s propensity for violent crime, an “angry mob” on Skid Row was shocked at the particularly “brazen” shooting of Yochum in broad daylight, and rushed to surround the alleged shooter, reports Los Angeles TV station KNBC. After the mob intervened, a security guard took the suspect into custody until police arrived, Im said.

The suspect was described as a man in his 20s. His identity will be released after he’s booked by police, Im said. A gun was recovered at the scene.

The suspect is believed to be Yochum’s ex-partner, according to KNBC. He allegedly shot her while she stood in front of the Gateway Apartments, where Yochum was residing as she tried to build a new life for herself.

For a brief time after the authorities took Yochum’s body away, KNBC reported that the deceased’s black, strapped, low-heeled shoes, and a yellow plastic cup marked the spot where she was killed.

A 2012 report from the National Coalition of Anti-Violence Programs found that transgender individuals are nearly two times as likely to face threats, harassment, and violence in intimate relations based on their gender identity.

“Transgender people face increased risk of  violence because of their gender identity and transphobia within intimate partnerships, ” said Aaron Eckhardt, training and technical assistance  director at Buckeye Region Anti-Violence Organization in the report.

Eckhardt’s words in the report emphasize what advocates must do to stem the tide of violence so that the harm individuals like Yochum faced may be prevented:

The LAPD did not respond to queries by press time.

This story is developing. Check back for updates.