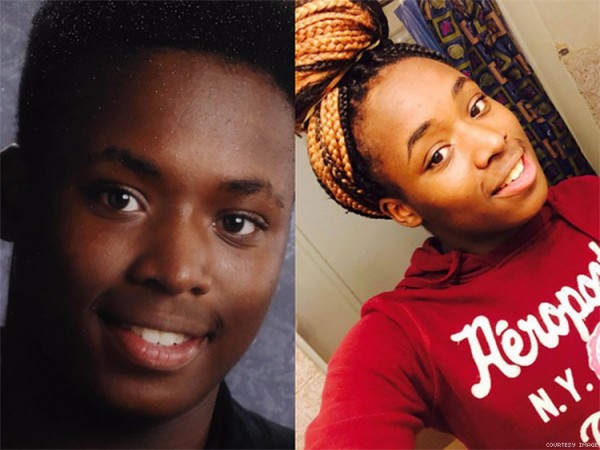 Katrina Johnson moved her family from Chicago to Burlington, Iowa, to escape rising violence in the big city, reports the Des Moines Register. She settled in the small city of around 50,000 residents in a culturally diverse, low-income neighborhood called South Hills. Her family thrived. Then the unthinkable happened.

On March 2, Burlington police discovered the body of Johnson’s 16-year-old child, a black gender-fluid teen who went by the names Kedarie and Kandicee, at approximately 11:30 p.m., according to local newspaper The Hawk Eye. Her child had been shot several times, and their body was left in an alley. The family’s obituary records the teen’s time of death as 11:44 p.m.

Johnson (depicted above with short hair and with long hair) used two names and identified as both transgender and gender-fluid, according to family and friends interviewed by the Register. Consequently, while the family’s obituary and news reports use masculine pronouns (which, by all accounts, the teenager did not repudiate), to affirm all of the individual’s experiences, the deceased is identified here with the gender-neutral pronoun “they.”

Police found Johnson after responding to calls from neighbors, who said that they heard “five to six” gunshots fired in the area, reports The Hawk Eye. Covered with a yellow tarp, Johnson’s body was not removed from the area until approximately 10 a.m. the next day. No weapon was found, and while the police originally indicated they were following several leads, three individuals were detained and then released after questioning. No official cause of death has been released, and the Burlington Police Department did not respond to queries by press time.

Police detectives “went door-to-door,” according to The Hawk Eye, interviewing potential witnesses, but were only informed that two vehicles were seen speeding away from the area after the gunshots rang out into the night. Both vehicles — a white SUV and a blue van — are believed to be involved in the alleged homicide. But the police have not publicly announced a motive for the crime.

While police told the Register that they are using all of the department’s resources to solve the case, no movement has occurred in the investigation since Johnson’s killing. Police contend that no evidence exists to suggest that Johnson’s killing was motivated by the teen’s gender-fluid identity. But Johnson’s mother told the Register she believes the taking of her child’s life is a hate crime based on the teen’s gender identity.

Johnson “had this beautiful smile,” Shaunda Campbell, a counselor at Burlington High School where Johnson was a junior, told the Register, noting that “there wasn’t a mean bone” in the teen’s body.

Johnson was an avid dancer, particularly at Maple Leaf Center, a community center in the South Hill neighborhood. The teen was also a burgeoning stylist who adored fashioning their hair in colorful coiffures. They also enjoyed “singing, listening to music, hanging out with friends, and surfing the Internet,” recalls the family’s obituary.

Despite the loss of her child, Johnson’s mother plans to stay in Burlington to raise her other children, with the significant support of her community. She said she did not realize the profound impact her child had on that community until the teen’s funeral on March 9. At the Burlington High School’s Carl Johannsen Gymnasium, scores of schoolmates, friends, and community members praised the “sunshine” within Johnson, according to the Register.

The community’s tenderness for Johnson resonates even in the fresh graffiti in South Hills. Unnamed individuals have emblazoned the side of the garage in the alley near where Johnson was found with a big painted rose and swooping red and black ornate calligraphy that reads: