Former boxing promoter Frank Maloney has revealed he is undergoing gender reassignment and now lives as a woman called Kellie.
In an interview in the Mirror, Kellie says: “I was born in the wrong body and I have always known I was a woman.”
She is working with transgender group TG Pals, whose managing director, Heather Ashton, told the BBC Kellie had been “incredibly brave and courageous”.

As Frank, Maloney guided Lennox Lewis to the world heavyweight title in 1993. In her interview, Kellie says: “I can’t keep living in the shadows, that is why I am doing what I am today. Living with the burden any longer would have killed me.
“What was wrong at birth is now being medically corrected. I have a female brain. I knew I was different from the minute I could compare myself to other children. I wasn’t in the right body. I was jealous of girls.” 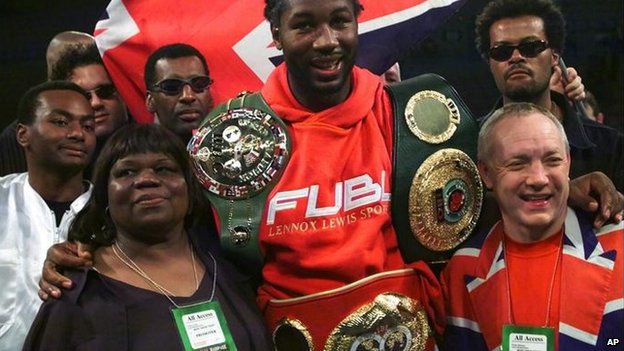 Lennox Lewis said he was initially shocked at the news, but respected his former promoter’s decision.
“This world we live in isn’t always cut and dried or black and white, and coming from the boxing fraternity, I can only imagine what a difficult decision this must be for Kellie. However, having taken some time to read Kellie’s statements, I understand better what she, and others in similar situations, are going through. I think that all people should be allowed to live their lives in a way that brings them harmony and inner peace. I respect Kellie’s decision and say that if this is what brings about true happiness in her life, than so be it.”

Ms Ashton said it had been a “huge decision” for Kellie to come out. “This is a big deal for any transgender person but particularly for Kellie who’s been in the public eye for such a long time. This group of people are the last societal group to achieve equality and to be socially accepted.”

Ms Ashton told BBC Radio 5 live Breakfast it could be “hugely difficult” for people to tell their partners, families and colleagues, “to come out and say I do love you, this is who I am, and please accept me”. She said she hoped Kellie’s example would encourage others contemplating gender reassignment to overcome their fear. Boxing journalist Steve Bunce tweeted: “Frank Maloney is possibly the bravest person in boxing. How can anybody give him stick? You have to just smile and say: “Go on girl!” A new life!”

Kellie said she had never felt able to tell anyone in boxing about her intentions but had been preparing for her gender transition while still living as Frank and working in the sport.
“I thought maybe I can earn enough money that one day I can disappear and live a new life completely away as a female and no one would ever bother me. Once you come out of sport you are soon forgotten and that was what I was hoping would happen to me.”

She said she was sure she could have done her job in boxing as a woman but her plans now focused on helping others going through a similar process. Kellie, who has been married twice and has children, said she intended to live as a single person and was now “mentally preparing” herself for the rest of her life. Since news of Kellie’s transformation has broken, she spoke to the Mirror again to thank people for their messages of support.
She said: “It just goes to show you how the world is changing for the better. Many other people in my position have been severely traumatised for years from what they’ve been through. I cannot thank the British public enough for their care and understanding. I have had kind text messages from people in boxing who I fell out with a long time ago. That was something I never expected.”

Maloney, 61, stood as the UKIP candidate for London mayor in the 2004 elections, coming fourth with just over 6% of the vote. The party was forced to defend its candidate when Maloney declined to campaign in the borough of Camden, saying there were “too many gays” there. It was one in a string of comments that gay Conservatives condemned as homophobic.
Maloney responded: “I’m not homophobic but in public let’s live a proper moral life – I think that’s important. I don’t think they [gay people] do a lot for society. I don’t have a problem with gays, what I have a problem with is them openly flaunting their sexuality. I’m more for traditional family values and family life.

In the 2010 general election, Maloney was the UKIP candidate in Barking, coming fifth with less than 3% of the vote.
Frank Maloney retired from involvement in boxing last October. At the time, Maloney said: “Boxing has given me some great times but it’s not the same business I grew to love anymore.

“The characters have gone and gradually over the last six months I have realised that I don’t want to be involved in it anymore.”