Nine-year-old Stormi set out last month to sell cookies just like every other Girl Scout — with a sales pitch and a goal.

But when Stormi, who is transgender, started knocking on neighbors’ doors near her home in Herrin, Ill., one man turned her away, saying: “Nobody wants to buy cookies from a boy in a dress.”

“It made me sad,” Stormi told BuzzFeed News. “Because I’m a girl.”

So, she said, she found a way to shut down her bully and sell more than 3,000 boxes of cookies. 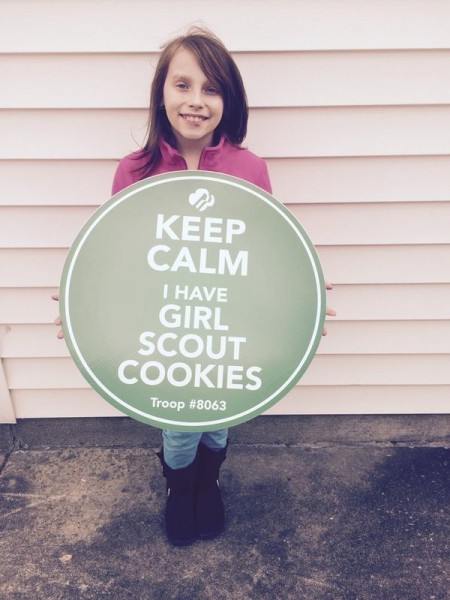 In addition to raising funds for the Girl Scouts, Stormi wanted to donate cookies to local foster children — because she is one. She went into Illinois’s foster care system about three years ago, her foster mother, Kim, told BuzzFeed, which did not use the family’s last name.

Attempts to reach the family through the Girl Scouts this week were unsuccessful.

BuzzFeed reported that Stormi decided to join the scouts last year; she recently told her foster mother that she wanted to give cookies to other children in the system.

But, her foster mother said, last month’s incident involving the neighbor was jarring.

“She was like, ‘Why am I not good enough?’” Kim told the news site. “We just started talking and she decided she wasn’t going to let him win.”

“My troop plans to use the money to help us go on trips,” she wrote online. “I have my own plans as well. At my request my family will donate boxes to local foster kids like me!”

She added: “I have learned that even though people can be mean I shouldn’t give up!”

Supporters have rallied around Stormi’s cause.

A New York-based comedy duo gave people who bought Stormi’s cookies free admission to a show. A California multimedia musical agreed to donate a box for every ticket sold.

An LGBTQ support group in Idaho sent out a call for support, too. “While out selling cookies,” a member from Idaho Falls Gender Community wrote, Stormi “was met with negativity, no orders, and even one less than kind person. … As a parent, this made me angry. As a parent of transgender children, this made me livid!

Stormi’s project ended over the weekend.

[Selling Girl Scout cookies online can have a dark side]

After a troop in Colorado admitted a 7-year-old transgender girl in 2011,several Girl Scout troops in Louisiana disbanded in protest and a California teen called for a boycott.

“Girl Scouts of the U.S.A. … is not being honest with us girls, its troops, its leaders, its parents or the American public,” the teen said in a YouTube video, released by a Houston-based group called the “Honest Girl Scouts.” “Girl Scouts describes itself as an all-girl experience. With that label, families trust that the girls will be in an environment that is not only nurturing and sensitive to girls’ needs, but also safe for girls.”

In 2015, a Girl Scouts troop in Washington was handed a $100,000 donation — as long as the girls agreed not to use the money to support transgender children.

The Girl Scouts of Western Washington returned the check.

“Girl Scouts is for every girl,” Megan Ferland, the Girl Scout council’s chief executive, told Seattle Metropolitan over the summer. “And every girl should have the opportunity to be a Girl Scout if she wants to.”

As an organization, Girl Scouts of the USA supports LBGTQ children.

“Placement of transgender youth is handled on a case-by-case basis, with the welfare and best interests of the child and the members of the troop/group in question a top priority,” the organization said on its website. “That said, if the child is recognized by the family and school/community as a girl and lives culturally as a girl, then Girl Scouts is an organization that can serve her in a setting that is both emotionally and physically safe.”

Kim told BuzzFeed the support motivated Stormi to fight back against discrimination.

“This is something I have been trying to instill in her for years,” Kim told the news site. “How worthy she is; who she is is okay. For her to be able to read all these messages that people are sending from around the world to support her, the love is just overwhelming.”

“She decided to donate boxes to something close to her heart — which is foster care,” Strobel told The Post. “She took something that wasn’t so pleasant and she turned it into a positive experience.”

Stormi said donating Girl Scout cookies to foster children is a tradition she wants to continue.

“I want kids like me to know they are perfect just the way they are,” she told BuzzFeed. “There are people all over the world that love you. Never give up because it does get better.”