In 2001, Australia set a world record for the largest ever victory in an international football match, netting 31 goals without a single breach of their own defence.

The game’s top scorer, Archie Thompson, broke the record for most goals scored by a player in an international match by claiming 13 goals.

While Thompson is now the tricky answer to particularly tough pub quiz question, the team Australia beat, American Samoa, is stamped on the memory of any football fan who heard the brutal score line.

The defeat sent the team spinning to the bottom of Fifa’s world rankings – an unenviable slot they would occupy for the next 10 years. No wins, just two goals scored.

So, in 2011, when the qualifying rounds for the approaching World Cup in Rio brought a maverick new football coach to the tiny South Pacific island, British documentary makers Kristian Brodie, Mike Brett and Steve Jamison decided to chart the team’s progress.

The result is Next Goal Wins, which has already been enthusiastically received at film festivals across the world.

“We’ve been in a dark room editing this movie and have felt an incredible connection with American Samoa and the journey we went on was incredibly emotional,” says Brett. “But to start to share that with audiences is an amazing experience.”

Producer Brodie adds: “Everybody in football is familiar with American Samoa because of that defeat and I think it sparked something in all of us that there was something behind the result which said something about the sprit of the game.”

“If you are a team that loses all the time – and that’s what American Samoa was – it says something about your spirit that you’re still playing.”

“I knew we were one of the worst teams in the world but I still wanted to represent American Samoa,” says current central defender Jaiyah Saelua.

“Just to carry 65,000 people on your shoulders and play your heart out no matter how bad you are, or how unskilled you are. It’s still an honour to represent your country.” 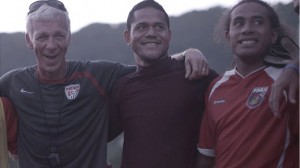 Rongen played briefly at Ajax in his native Netherlands in the 70s before moving to the US where he played alongside Dutch legend Johan Cruyff and Manchester United legend George Best at the Los Angeles Aztecs.

“My wife’s first reaction was, ‘Are you daft?’,” says Rongen in a deep, booming voice. “In saying that, everybody looks for opportunities and challenges, I love to travel and take on new opportunities and this was a unique one to say the least. They were ranked last so I felt they couldn’t get any worse.”

But he insists there “wasn’t any doubting” his decision. “I saw the untapped potential from day one,” he explains. “Yes, it was a low standard but I also felt we could make some differences.

“Look at this beautiful woman that’s athletically very strong beside me, I knew there were some intangibles that I could work with to turn this team around in a short space of time.”

The woman Rongen refers to is Jaiyah Saelua, born Johnny, but one of the island’s Fa’afafine – an integral part of traditional Samoan culture, born biologically male but embodying both masculine and feminine gender traits.

It makes her the world’s first transgender national football player. While, through the force of her own personality, Jaiyah becomes an integral part of the documentary – there is no explicit battle for acceptance from her teammates, the issue of sexual identity is just not an issue for the islanders.

“Its natural in American Samoa because its part of the culture. Fa’afafine’s have been around since before the missionaries came. It’s so deeply embedded in the foundations of our culture to show respect and that includes respect for transgender people,” says Jaiyah. 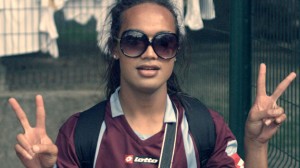 “A lot of us grew up not knowing discrimination and not knowing adversity so its easy for us to live our lives to our highest potential.”

The acceptance of Jaiyah’s sexual identity may offer hope for the future but currently there is not a single openly gay footballer playing in the top divisions in Britain and elsewhere some fans still think it is acceptable to throw a banana at the feet of a black player.

Barcelona player Dani Alves won international respect for the nonchalant way he dealt with a recent incident, casually picking up the fruit and taking a bite before continuing with the game.

Does Rongen, with his years of experience at coaching a playing level, believe things will change for the better?

“I think there’s something in motion, not only with the FA but internationally with Fifa where there is going to be more inclusivity, more openness, people are not judging other people as much. Is this going to change overnight? No its not.

“But for Jaiyah to become the first transgender player to play in a World Cup qualifying game is obviously huge. To get this kind of attention, positive attention both off and on the field, on the streets is quite refreshing and hopefully people will see the light at the end of the tunnel and embrace other cultures and religions and sexualities.”

Jamieson adds he and his filmmakers are proud that they have contributed to the ongoing debate.

“As Thomas said, will things change overnight? No, it’s very small steps, as you look at racism in football 20 years ago, there was a huge mountain to climb and, in spite of the Dani Alves incident this week, it feels like we’ve come an awful long way in that debate.

“The people who express racism in football now are in the minority. In terms of sexuality and gender in football, we’ve still got that mountain to climb. Hopefully Robbie Rogers (LA Galaxy midfielder) coming out and making a stand is a small step forward and I think that’s translated into other sports, basketball, American football, rugby and hopefully us bringing Jaiyah’s story to public is another small step.”

Screenings of Next Goal Wins at the Tribeca Film Festival in New York and in Los Angeles and London have, so far, earned rave reviews.

Anita Gates, in the New York Times, writes: “The film is a portrait of a culture that values the joys of camaraderie over other factors.”

While in the Los Angeles Times, Sherri Linden called the film “an irresistible underdog story — sports-fan credentials not required”.

Of the experience, Brett concludes: “We were talking amongst ourselves and even if we were to go on to have enormous success, we will never again make a movie through which we can connect with our subjects the way we have.

“And it was a million to one shot, most documentaries are retrospective, this happened in the moment, we were there and those experiences and those memories will be with us for as long as we live.”