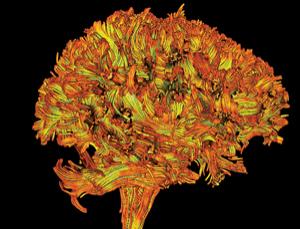 Differences in the brain’s white matter that clash with a person’s genetic sex may hold the key to identifying transsexual people before puberty. Doctors could use this information to make a case for delaying puberty to improve the success of a sex change later.

Medics are keen to find concrete physical evidence to help those children who feel they are trapped in the body of the opposite sex. One key brain region involved is the BSTc, an area of grey matter. But the region is too small to scan in a living person so differences have only been picked up at post-mortem.

Antonio Guillamon‘s team at the National University of Distance Education in Madrid, Spain, think they have found a better way to spot a transsexual brain. In a study due to be published next month, the team ran MRI scans on the brains of 18 female-to-male transsexual people who’d had no treatment and compared them with those of 24 males and 19 females.

They found significant differences between male and female brains in four regions of white matter – and the female-to-male transsexual people had white matter in these regions that resembled a male brain (Journal of Psychiatric Research, DOI: 10.1016/j.jpsychires.2010.05.006). “It’s the first time it has been shown that the brains of female-to-male transsexual people are masculinised,” Guillamon says.

In a separate study, the team used the same technique to compare white matter in 18 male-to-female transsexual people with that in 19 males and 19 females. Surprisingly, in each transsexual person’s brain the structure of the white matter in the four regions was halfway between that of the males and females (Journal of Psychiatric Research, DOI: 10.1016/j.jpsychires.2010.11.007). “Their brains are not completely masculinised and not completely feminised, but they still feel female,” says Guillamon.

Guillamon isn’t sure whether the four regions are at all associated with notions of gender, but Ivanka Savic-Berglund at the Karolinska Institute in Stockholm, Sweden, thinks they might be. One of the four regions – the superior longitudinal fascicle – is particularly interesting, she says. “It connects the parietal lobe [involved in sensory processing] and frontal lobe [involved in planning movement] and may have implications in body perception.”

A 2010 study of 121 transgender people found that 38 per cent realised they had gender variance by age 5. White matter differences could provide independent confirmation that such children might benefit from treatment to delay puberty.

A study by Sean Deoni‘s team at King’s College London suggests it may soon be possible to look for these differences in such children. Deoni’s team adapted an MRI scanner to be as quiet as possible so it could be used to monitor the development of white matter in sleeping infants. Using new image analysis software they could track when and where myelin – the neuron covering that makes white matter white – was laid down (Journal of Neuroscience, vol 31, p 784). Although the sample was too small to identify any gender differences in development, Deoni expects to see differences developing in the brain “by 2 or 3 years of age”.

Guillamon thinks such scans may not help in all cases. “Research has shown that white matter matures during the first 20 to 30 years of life,” he says. “People may experience early or late onset of transsexuality and we don’t know what causes this difference.”