From Gig Harbor, WA to Phoenix, AZ, Vinessa Janovich has been all over the place. But, she’s finally settled back into the Pacific Northwest and is ready to take it by storm. Yesterday, I had the privilege of celebrating the Fourth of July with her and was able to conduct a face-to-face interview. Of course, we were drinking whiskey ‘n coke, so some of her answers are very candid.

Vinessa Janovich is more than just a pretty face, she’s a confident transgendered woman who isn’t afraid to say what’s on her mind. When she’s not getting booked in Los Angeles, she’s bouncing around the state to different events and venues, and even finds time to just straight up party with her friends. But all in all, she’s a family girl. 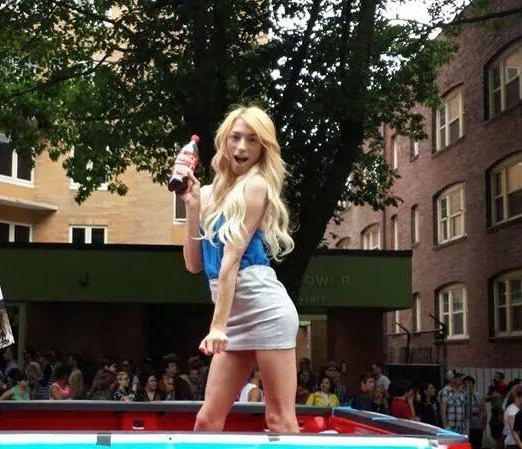 Brad Gilligan: So, let’s just jump right in. When did you “come out” as a transgendered woman?

Vinessa Janovich: My original plan was to disappear, to runaway to California, because I was so scared of what people would think of me. And then, I would return a few years later and be like, “Hey, y’all! It’s Vinessa!” But, that’s not what happened. I ended up deciding to be happy when I was 17. I learned everything I needed to learn about myself that I could at that time and I came out as a transgendered woman. It’s so bad to say, but I did not ask for a dick and I’m so excited to get that situation corrected.

Brad Gilligan: I feel like a lot of people, even in the LGBT community, are still educating themselves on trans* issues and don’t really know how to approach the subject. How should they verbalize their thoughts so that they don’t offend someone?

Vinessa Janovich: Oh, I really love this question. I’ve been approached many times by strangers asking me usually, “So like, are you a guy?” And that, to me, is extremely offensive. Because, I do not look like a man at all. I have tits. The only thing that could trigger that thought is my razor bumps from shaving, since I haven’t yet had laser hair removal of it. I think people should just use common sense, but of course common sense isn’t so common. The best way to approach it is to ask them if they’re transgendered or not. If they get offended by that, then they’re stupid. I mean, what it boils down to is would you be offended if someone came up to you at a bar in front of a group of people and asked if you had a loose or tight pussy? If you had a small or giant dick? It’s just unnecessary. So, if you can avoid asking it, you should avoid asking it.

Brad Gilligan: Is there anything else that is sensitive that you personally feel people should know about?

Vinessa Janovich: I’m an open book, as cliché as that sounds. The “so, are you a guy” question is the only thing that offends me. Everything else is fair game and I will freely tell you about my experiences, statistics…whatever you want. I will say though that I won’t tell anyone my “boy name,” because I was never a man. You can probably Google it or something. As for anything else, please don’t ask people if they still have a dick or not, because it’s none of your damn business. If you’re BFFs, then sure, pop the question. Otherwise, it’s irrelevant, because my response will always be, “Do you still have YOUR penis?”

Brad Gilligan: In regards to the ongoing controversy around “RuPaul’s Drag Race” and their usage of she-mail, the “Female vs. She-Male” competition, and this alleged civil war of word policing in the LGBT community, what is your opinion on all of that?

Vinessa Janovich: Here’s the thing, every trans* person has a different experience. Personally, I don’t care what you call me, because I’m unbothered by it. I’m far too busy and too focused on my career and trying to make something of myself that I could give two shits what people call me. They’re just words and I won’t lose sleep over them. And quite frankly, the fact that there was a competition where people couldn’t decipher if it was a transgendered woman or not is actually really groundbreaking. I’m not sure why people were offended by that, I think that’s really cool. RuPaul, her associates, and the rest of the LGB in LGBT could stand to be a lot more sensitive on the subject, but they are not the enemy.

Brad Gilligan: While walking around at the Seattle Pride festival last weekend, I saw someone come up to you and tell you that you were their role model. You made them feel unashamed of transitioning and they were going to tell their parents. How did that make you feel?

Vinessa Janovich: That made me feel like I’m succeeding in what I’ve really wanted to do in life, which is to inspire people to be who they are on the inside and not just on the outside. I want people to not be afraid of following their dreams and goals for themselves, especially their careers. We need to worry about pleasing ourselves first, because no matter what, for our whole life, we have to sleep with ourselves every night. I’ve never felt like my description was male to female, because there is not one point in my life where I’ve ever felt male. I believe my gender reassignment surgery and my hormone replacement therapy is corrective of a physical deformity and medically necessary. So, if I inspire anyone to feel better about themselves and to be their true authentic self, then y’know, mission accomplished.

Brad Gilligan: That brings me to my next question. People like to pass judgement and say that trans* people are just psychotic and screwed in the head. That’s it not a real thing. What would you say to that?

Vinessa Janovich: Well, short answer would be that they’re fucking wrong. I used to have problems with OCD, anxiety, and manic depression. Studies have shown that I and other transgendered people run the risk of dementia and other physical debilitations if it isn’t corrected. I would literally never wish being trans* on anyone, because it’s not an easy road, by any means. Imagine being exactly how you are right now, but waking up the next morning with the opposite sex organs. Ain’t nobody got time for that! It took me 17 years to understand it and begin enjoying my life, knowing that I’m not crazy, I’m not a demon, and I’m not going to Hell for being transgendered. Today, I don’t have to lie and I’m the happiest I’ve ever been. I’d like to blaze a trail for trans* people, and anyone really, who’s on the search for happiness. 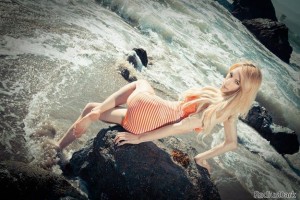 Brad Gilligan: Switching gears, how did you get into modeling and what do you like the most about it?

Vinessa Janovich: I got into modeling in 2010 for Seattle Fashion week. My first time walking a runway was when I walked for Richard Blayne Walsh as a finale piece for his set. I was the first openly trans*gendered model to walk the runway in Washington state and the runway was 92 feet long. The moment I set foot on it, it was like ever bad and good thing disappeared. Pure freedom. I don’t understand modeling, but I love doing it. It’s a morbid, tough industry. But, who doesn’t love getting their picture taken and wearing cute outfits? My favorite part is working with so many different photographers, because they all have different visions, and it’s really cool to see how their art differentiates.

Brad Gilligan: Who is your biggest influence in modeling, whether they be transgendered or otherwise?

Vinessa Janovich: I don’t really have a specific influence celebrity-wise, it’s always been my family and friends. Even the fans that I have. I’m more inspired by people than celebrities, but if I have to choose, I’ll say that I really admire Laverne Cox of Netflix’s Orange is the New Black. She’s taking it to a new level that my community hasn’t quite experienced and I really love what she’s doing with her celebrity status.

Brad Gilligan: Aside from a successful modeling career and be a leader for the masses, what do you most want out of life right now and in the future?

Vinessa Janovich: Right now, I just want a good man and a puppy, so that I can start a family. Though, currently I’m dedicating my body and my mind to my career. I just want to be living art. In the future, I’ll get that good man and a cute little puppy. It’ll happen eventually. Everything happens for a reason.

Brad Gilligan: Last question, what do you most want people to know about you after reading this interview, if they weren’t familiar with you before?

You can find Vinessa Janovich on Facebook or regularly at The Mix in Tacoma, WA. Will she be hosting karaoke again? I forgot to ask. Gawd, dammit.