A successful male model has bravely given up his career to start all over again – as a female model. 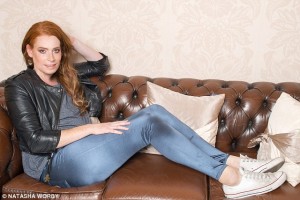 Chloe Lapper, 28, used to be a man called Shane, and walked the catwalks of some of the most famous fashion houses in the world. But now Chloe, from Banbury, Oxon, is finally on the way to achieving her lifelong dream of becoming a woman, and is determined to make waves in the fashion industry once again.

Chloe said:
“When I started working as a male model at the age of 22, it was an amazing experience, but I would be so uncomfortable when people complimented me or told me I was gorgeous. I knew I was in the wrong body, so it just felt wrong. Making the transition to a woman is the best decision I ever made – I wish I’d done it sooner.”

Now, dressed in heels and and mini-dress and with long curly hair, it is hard to believe that Chloe, was once a male model who worked for the likes of Dolce & Gabbana. But Chloe – as Shane – was scouted after moving to London six years ago and was immediately thrust into the limelight. Shane enjoyed a successful modelling career, meeting numerous celebrities, and even launching a PR company. 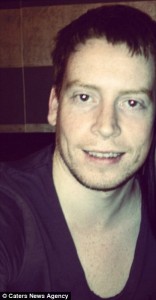 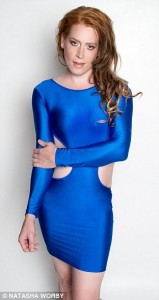 Chloe said:
“I’d thought about modelling before but I never really believed I could do it. When I was scouted I was quite shocked, but with my strong jaw and good height, I was told that I had the right look, and suddenly it took off. I couldn’t believe it when I started getting booked for jobs.”

But the pretty red head had known since an early age that she’d been born in the wrong body.

Chloe said:
“I think I was about seven when I realised I should have been born a girl.
I have five sisters, and I’d watch them all dress up and put on make up and I’d be so jealous. I desperately wanted to be like them. I’d paint my toes as I knew it was the one thing I could do without people noticing. I used to try on my sisters’ clothes when they were out – once I was trying on my auntie’s clothes and my uncle caught me out.
Everyone knew from fairly early on that I wanted to be a girl – I even announced it on Facebook when I was 18. But everything finally fell into place about four years ago – I was in a relationship with a woman and I was finding it really difficult. I knew I wasn’t being true to myself, and I realised I was mentally ready to make the transition.
I was nervous about people’s reactions – especially from people in the industry – but everyone’s been really supportive.”

After years of psychological assessments Chloe has now started hormone treatments, and is raising money for her gender reassignment surgery.

“I’ve already noticed a few changes in my body and in myself. My facial features have changed a bit and my voice is higher, but I’ve also started to think more like a woman too – I think much more logically about things now. I’d really like to have a boob job soon as I think this will be a big step in my transformation.”

Chloe’s change has been so dramatic that she says people rarely notice that she was ever once a man.

“I go out a lot in London to some of the biggest clubs in Mayfair and I hardly ever have any negative comments. I’m not too loud or over the top – I’m just myself, so nobody bats an eye lid. I was out once and I even had two men fighting for my attention. It was such a confidence boost for me.”

Now, Chloe can’t wait to continue her transformation and make a name for herself in the fashion industry.

See more at The Daily Mail.