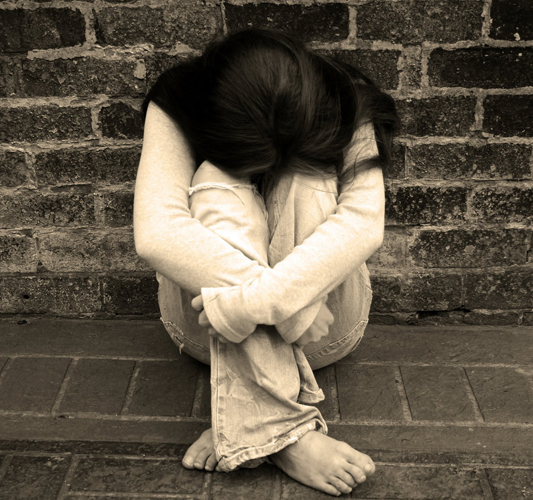 Trans Mentality: One Woman’s Story From The Inside
by Victoria Darling

Author’s note: This story is 100% true. To protect the identity of my friend, her name has been changed to Pamela. This could be any trans woman who seeks assistance from a mental health facility, however. This article discusses institutionalized transmisogyny, gaslighting, misgendering, and transphobia. Appropriate trigger warnings apply.

I came home from running errands to three voice mails on my phone which I left charging on the night stand. Her tone went steadily from slightly annoyed to panicked and tearful. Just before arriving I received a text reading: “They are about to declare me 5150 because I’m asking to be released and they won’t let me go.”

I sat on a plastic bench which just was too uncomfortable to have not been designed to be that way, and about fifteen minutes later, my friend Pamela came out of the Restricted Area. Tears were still streaming day-old eyeliner down her cheeks, and she was clumsily carrying her stuffed bunny and a duffel bag. “Get me the fuck out of here…” she stated, striding half in fear, half in something I can’t to this day identify, out the door before I could even stand up.

Pamela is a trans woman who transitioned a little later in life than she would have liked. Gender dysphoria got the better of her at the age of 35 and she decided that she just couldn’t lie to the world any longer. After two years, she lost her job and hadn’t been able to find a new one. She’d been couch surfing for nearly a year and had tried camming for income, but for whatever reason, she wasn’t able to build a following. Adding to Pamela’s issues, she recently did not get a job she had really desired because she had been doxxed (doxxing is the practice of revealing another person’s personal information on the Internet) by a transphobic feminist, who had released her birth name along with a litany of libelous slander on several websites.

Depression was getting the better of Pamela. Suicidal thoughts became very prevalent with her, and on the advice of her psychologist she went to seek in-patient treatment at a mental health facility. I had dropped her off at the facility less than 24 hours before, and her demeanor then was one of guarded hope — like a child entering school for the first time. Now, as she was flinging her belongings over the seat, she was shaking and had a terrified look in her eyes. I started driving. After a few minutes she said, “That was officially the stupidest thing I could have ever done. They had zero interest in helping me. At all. All they did was gaslight and misgender me.”

I was silent for a bit, offended at the behavior just described to me being a trans woman myself. I knew Pam needed to talk, and being her friend, I needed to listen. We sat in silence for a few more minutes, and gradually, I coaxed Pam’s story from her.

When I dropped her off, it was nearly noon. She told me she wasn’t even admitted until seven hours later. Having sat in those torturous benches for only 15 minutes or so, I could see why she would be a little edgy. She’d been given a private room and was assured that her being transgender would not be an issue. “That was a fucking lie and a half,” she told me. “It was an issue. When the staff gendered me properly, it was condescending and patronizing. When they started calling me ‘sir’, I fucking lost it.”

She told me she’d been cleared to take her own medication, and use her electric razor in private as laser hair removal is only effective on dark hair. Evidently, neither of these happened. When it was time for her morning medication she was given Lexapro and Prazacin, but was denied her hormones because –apparently– there was not a pharmacist on staff who could confirm that the medications were what the labels claimed they were. It was Saturday, and Pam was told that on Monday the pharmacist would be in, and the meds would be confirmed then. She was also told that the hospital she was at did not carry any of her medications. I am pretty certain that denying anyone their prescribed medication is not legal.

“They refused to even look at the pill description on the label, or use the pill identifier on drugs dot com,” she said with frustration.

Any physician who deals with trans patients will tell you that starting and stopping hormone therapy is very hard on the endocrine system, not to mention any negative psychological impacts which will vary wildly from patient to patient. Fact is, Pamela was already of precarious mental health. Being two hours late taking her hormones, when the nurse refused them to her explaining the meds needed to be verified, she had slammed her hand down on the counter and nearly screamed “NO! That’s NOT okay!” She was there on her own accord and she demanded to be released immediately. She was told “The psychiatrist needs to clear you. He’ll be out soon.”

She then requested to use her electric razor in the ladies room so she could get the bristling fuzz off her face. She was told that she would need to shave with a disposable razor provided by the hospital, and would need to shave in the public area where the men did. (I suspect this was about the time is when her first message was left on my phone.) “I’m NOT a MAN!” she yelled at the nurse, who stated that there is an M on her Medi-Cal card, and thus the nurse needed to uphold the male standards of care. “My ID says female”, she countered. “My BIRTH CERTIFICATE says FEMALE! I don’t know where the State got that information, but I have been fighting with them for weeks over it.”

This is when the nurse told her “Calm down sir. The psychiatrist will be with you soon.” At this point in her story even I wanted to give that nurse a more than furious talking-to. The Los Angeles LGBT Center recommended that facility as a safe space for trans people to get in-patient mental health treatment. Obviously, this was not going to happen. (I likely got the second call right around then.)

Pam explained that she had been told repeatedly that the psychiatrist would be with her “soon” for over an hour by this point. She’d been denied her hormones, her razor, her cosmetics, and by extension she’d been denied her femininity. “I told them that I knew I was being gaslighted, and I told them it wasn’t going to work,” she said to me. She was able to gain access to her own phone (the prior calls were from the payphone they had in the hall) and the message she left was heartbreaking. It was a meek voice, swimming in tears that simply said “Victoria… please come get me…”

Between then and my arrival, Pam had asked one more time to see the doctor who could release her. Again she was told the doctor would be with her “…soon…” The nurse had been playing this little game for nearly two hours.

That’s when she broke. Shaking and tearful, she demanded that they not play this game with her, and again was told to calm down. “YOU DON’T TELL A WOMAN TO CALM DOWN WHEN SHE’S ANGRY!” she screamed. “You should know that better than anyone.” That’s when the orderlies were called to take her to the 5150 wing. Pam began walking calmly to her room. The orderlies followed her calling out “Sir, we can do this the easy way or the hard way.”

Pam told me that if she’d been told it would take an hour or two at the beginning, she simply would have gone to her room and read her book while she waited. “The constant ‘sooning’ was a way to keep gaslighting me, just so they could hold me against my will. I’m sure of it,” she stated.

I’m not a ‘sir’, she said to herself silently. The orderlies were called off, which was very fortunate for Pam, as it would have made my fetching her so much more complicated. After about 15 minutes, she told me, the psychiatrist who could release her entered her room, flanked by orderlies who — she said — misgendered her yet again. She sat cross-legged on her bed, tears rolling down her cheek, clutching her stuffed bunny. “Let me go home,” she stated calmly.

“Your file says you are suicidal,” the doctor stated.
“I have suicidal ideations, which are a symptom of something else. I’m here for a diagnosis. I’m not going to kill myself,” Pam told the doctor.
“I have the power to hold you here,” he said.
“Please. Just let me go,” Pam replied calmly and tearfully, repressing the urge to strangle him for threatening her. She was pushed to the point of sheer panic, and being restrained against her will is a deep and primal fear she has. She knew this, and recognized again that he too, was trying to gaslight her in order to keep her there. (She was shaking again when she told me this part of her tale, panic in her eyes.)

Thirty minutes later was when I saw Pam coming out the door. She would have come out sooner, but it took them 25 minutes to get her hormones back to her. The nurses kept claiming that there were no medications brought in with her, and they didn’t have any more of her possessions. (This by the way, is an excellent example of gaslighting. Both were lies.)

I am outraged over what happened to my friend at a supposed “trans-friendly” space. The Los Angeles LGBT Center has taken action, filing a formal complaint with several authorities against that facility, and they have suspended recommending any patient for treatment there until appropriate education for the staff can take place.

As for Pam, she’s in the process of finding another place to live, and is still unable to locate work. Since coming out trans, she has been a target for transphobic feminists, societal prejudice against trans women, and a victim of institutionalized transphobia. The terrible truth is she could be any trans woman, and we need to work together to make this kind of treatment a rarity rather than the rule.

After transitioning in 2011, Victoria moved to Los Angeles where she and long-time friend Niki Flux founded the blog site TransEthics. Victoria interviews trans people from around the world and is a major supporter of sex workers’ and trans rights. Visit her website at Trans Ethics.

2 thoughts on “GP Exclusive : Trans Mentality: One Woman’s Story From The Inside”