See more at The Guardian

When she was a 27-year-old unemployed actor, Julie Hesmondhalgh had a beautiful dream. “I believed that art could really change things and I thought that if I could just get a part where I could grab people and change the way they think, that would be the greatest thing I could do in my career.”

Against the odds, that dream came true. When Hayley Cropper swallows poison on Coronation Street on Monday night, taking her own life to escape inoperable pancreatic cancer, with her beloved husband, Roy, in pieces at her bedside, it will be the end of a character who, thanks to Hesmondhalgh’s performance, has captivated and challenged British TV viewers for 16 years.

When she first arrived on our screens on 26 January 1998, Hayley Anne Patterson (née Harold Patterson) was British TV’s first transgender character. At that stage she was a pre-operative transsexual woman, born male but seeking sex reassignment surgery. And, fingers crossed, romance with a man.

“I remember going to the audition in a leopardskin coat because I thought she was going to be another Bet Lynch.” Hayley was no Bet: she was shy, mousy and born a man. “When I got to the office, everybody was laughing. The idea was that Roy was going on a series of disastrous dates and I would be the third, a pre-op transsexual. But I didn’t laugh. I thought: ‘This isn’t a joke, Hayley won’t be a funny character.'”

She got the part and went off to Manchester’s leftwing Front Line Books for remedial reading on transgender issues. But, when Hayley finally hit our screens, transgender pressure groups complained. “They said: ‘How could a young upstart who isn’t transgender play the part seriously?'”

Hesmondhalgh’s sympathetic portrayal of Hayley silenced those objections because she revolutionised attitudes to transgender people – and not just among Corrie’s viewers. The upstart became the hero: significantly, she is now a patron of two transgender pressure groups, Trans Media Watch and Press for Change.

Part of the reason for that revolution was the charm of Hayley’s relationship and later marriage to the no less intriguing character Roy Cropper. “Somehow, Hayley and Roy developed a chemistry nobody – certainly no one on the show, and certainly not me or David [Neilson, who plays Roy] – dreamed of.”

More significantly, Hesmondhalgh’s portrayal of Hayley – including her trip to get gender-reassignment surgery, and her frustration that she had insufficient legal status as a transgender person and so initially couldn’t marry Roy – also helped catalyse a national debate that led to the 2004 Gender Recognition Act, a law that granted transgender people full legal status in their acquired sex.

Now the manner of Hayley’s looming death is unleashing another debate about a vexed social and ethical issue: the right to die. Could her suicide – and should it – spark a national debate that will help change the law? Is it ever right to take your own life? Will Hayley’s death, as some campaigners against euthanasia and considered suicide have maintained, prompt copycat suicides?

Alistair Thompson, of Care Not Killing, who oppose euthanasia and assisted suicide, says: “The World Health Organisation and the Samaritans both urge the media to steer clear of promoting suicide. They do so with good reason. The danger is that tragic stories such as Hayley’s that gain widespread publicity can normalise suicide and spark a spate of copycat deaths from people in a similar plight.”

Hesmondhalgh denies Hayley’s death will promote or normalise suicide. “The idea that it will promote copycat suicides pisses me off more than anything,” says Hesmondhalgh. “Hundreds of murders are shown every day on TV and nobody’s saying that normalises murder. But this story – that has been seeded for months and everybody knows is going to happen – is supposed to make people in Hayley’s condition commit suicide? Rubbish! Nobody’s going to be tuning in on Monday night to copy her. It’s insulting to those who are in Hayley’s predicament to say otherwise.”

The Samaritans gave guidance to Coronation Street on the Hayley storyline. “Our role was to help them to cover this as safely as possible, not to approve their decision to run the story at all,” says Rachel Kirby-Rider, director of fundraising and communications.

A major concern for the Samaritans was that Coronation Street did not give details of how Hayley obtained the drugs to kill herself, or what they were. “There is extensive research that demonstrates that inappropriate portrayal, or reporting, of suicide can lead to imitative or ‘copycat’ behaviour among vulnerable people,” adds Kirby-Rider.

Indeed, nobody, argues Hesmondhalgh, could take the manner of Hayley’s demise as a depiction of, in Keats’s words, “easeful death” that one might blithely copy. “It’s not a beautiful death. When she takes the poison, she chokes. It’s not nice.” And that, she says, was a key consideration for the actors and producers of the soap. “It was important we didn’t sentimentalise suicide.”
Coronation Street Roy Hayley Blackpool Hayley and Roy (played by David Neilson) in Coronation Street. Photograph: Rex Features

Also significant is the fact that both Roy and the couple’s friend Fiz Stape struggle to support Hayley’s decision to take her own life. This, at least, has given a semblance of balance in tackling the right-to-die issue. “Not everyone will feel Hayley’s decision is the right one and we fully respect this,” says Coronation Street producer Stuart Blackburn. “For that reason we will be exploring both sides of the debate on screen.”

This, though, hasn’t placated anti-suicide groups. Alistair Thompson argues that Coronation Street should have depicted access to good palliative care rather than showing suicide. “They should have focused on the amazing work done in hospices and hospital wards across the country.”

Blackburn contends that the storyline has long depicted Hayley’s palliative care as “superb”. But, Blackburn adds, “She is scared that the pain relief can cause confusion and a loss of clarity.” Worst of all, Hayley fears that the drugs might make her regress to being Harold. “She wants to die as Hayley – the identity she has spent her whole life fighting for,” adds Blackburn.

Monday night’s episode of Coronation Street comes at a topical moment for the right to die debate. Lord Falconer’s assisted dying bill, allowing a terminally ill person to choose the manner and timing of their death, will be debated in the Lords this year. The bill would enable terminally ill patients deemed to have no more than six months to live to be prescribed a fatal dose of drugs if they demonstrated that they have reached a “clear and settled intention” to end their life. Among the bill’s critics, Lady Butler-Sloss, former head of the high court family division, Lord Carlile QC and Lord Brennan QC, argue that the bill would offer a blank cheque to euthanasia. In a paper published by the campaign group Living and Dying Well, the three lawyers argued: “The law exists not only, or even primarily, to punish offenders but also to indicate those actions of which, as a society, we disapprove. One of those actions is aiding and abetting other people’s suicides.”

But does the current law express disapproval of aiding and abetting suicides? The question was thrown into relief this week when, following an inquest into the suicide pact of an elderly Newbury couple, it was revealed that the Crown Prosecution Service had decided it was not in the public interest to prosecute the daughter who assisted them.

The inquest heard that retired GP David Arnold, 82, and his wife Elizabeth, 85, a retired teacher, wanted to die because they were both struggling with debilitating illnesses. They had sought help from the euthanasia clinic Dignitas, but it had turned them down because of Elizabeth Arnold’s “mental deterioration”. So instead the couple enlisted the help of their daughter, 59-year-old Georgina Roberts, to give them poison.

Roberts said she was “motivated entirely by compassion and love … I’m a human being who loved my parents very deeply and wanted to help them when they couldn’t help themselves.”

Currently, though, assisting a suicide is a criminal offence in England and Wales and carries a maximum sentence of 14 years. That said, in 2010 guidelines from then director of public prosecutions, Keir Starmer, said action against friends or relatives who assisted out of compassion, not for personal gain, would be unlikely.

“Thank God they didn’t proceed with prosecution,” says Hesmondhalgh. “For me it’s a no-brainer. You shouldn’t prosecute someone in those circumstances who is acting out of compassion.” She says she supports Lord Falconer’s assisted dying bill. Why? “More than anything, I couldn’t think that what happened to Tony Nicklinson was in any way OK.” Nicklinson, a 58-year-old, suffered from locked-in syndrome. He was paralysed from the neck down after suffering a stroke in 2005 and described his life as a “living nightmare”. In July 2012 he lost a high court case to allow doctors to end his life. A month later he died at home after refusing food.

Hayley’s suicide is topical, but not the first time soaps have tackled the right-to-die issue. Mark Lawson points out: “Ethel in EastEnders in 2000 and Jackson in Emmerdale in 2011 also voluntarily ended their suffering (from old age and paraplegia respectively) in the presence of a sympathetic friend or relative.” But Hayley’s storyline is different in that it has been a lengthy meditation on the theme, and Hesmondhalgh believes it has already initiated profound reflection on the issue. “I was watching Gogglebox [Channel 4’s documentary series in which viewers watch couples and families themselves watching and reacting to TV programmes] and I know it’s a bit of a setup, but it’s really moved me that it’s shown how people are having conversations about assisted dying. They are having great existential conversations about when you would make the decision to commit suicide, and how your partner would feel. It’s felt incredible to have been part of that.”

But is there bias in her depiction of Hayley? Hesmondhalgh, after all, is a member of the British Humanist Association, which supports attempts to legalise assisted dying, assisted suicide and voluntary euthanasia. “I think that’s hilarious – as if I could influence the scripts. I can’t. But if people ask me the question about what I think about the issue, I’m going to say.”

For Julie Hesmondhalgh, there is life after Hayley’s death. She shot Hayley’s death scene in November and is now preparing to appear in two plays at Manchester’s Royal Exchange Theatre. As a result she’s been spared the aftershocks of Hayley’s death – not least poor Roy being too grief-stricken to attend her funeral. “I got a text from David today saying he’s just going back to work, and part of me envies him because I loved working on Coronation Street. I’m so proud of what we achieved.” 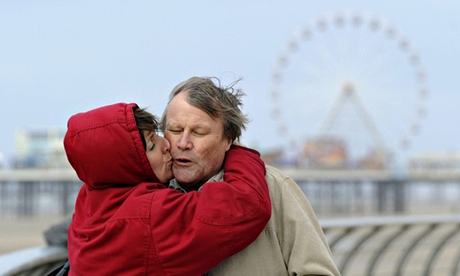