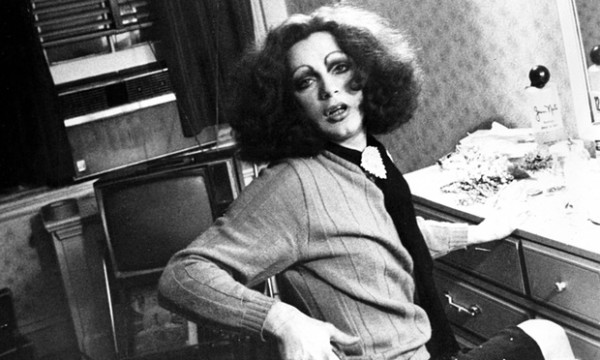 I don’t speak for the dead but I can’t help feeling that, wherever she may be, cult transgender inspiration Holly Woodlawn is looking down (or up) with a smile on her face. Though woefully young by modern standards, 69 is a decidedly cheeky age to kick the bucket. Holly was a veritable bon viveur in life and I’m sure she’d never let a little thing like death get in the way of her having a laugh. Looking back on her transient fame, she told the Guardian in 2007: “Little did I realise that not only would there be no money, but that your star would flicker for two seconds and that was it. But it was worth it, the drugs, the parties, it was fabulous.”

It didn’t start off fabulous. As she recalled in her memoir, A Low Life in High Heels: “At the age of 16, when most kids were cramming for trigonometry exams, I was turning tricks, living off the streets and wondering when my next meal was coming.” I’d love to tell you that Holly’s hardships were a sign of the times she grew up in but, sadly, even today gay and trans kids are much more likely to find themselves sleeping rough and – like me – turning tricks by the age of 16. Holly wasn’t down on her luck for too long though, opting instead for 15 minutes of fame with the help of a certain Andy Warhol. She got his attention by announcing herself as one of his “superstars” before they’d even met. A few years later she’d starred in two of his films and certainly was.

Along with Candy Darling, she also inspired Lou Reed’s Walk on the Wild Side. As Against Me! front woman Laura Jane Grace told me upon Reed’s death in 2013: “[It] was one of the first times I’d heard someone sing about a trans person, and romanticise it too. Any time a trans person is mentioned culturally, and isn’t the butt of a joke, it’s a good thing.” A song about trans women and gay hustlers might not seem like a big deal in 2015, but when the record was released in 1972, homosexuality had only been legal in England for a few years. Holly and her friends were revolutionaries.

A few more films followed and Holly also had a bit of a career as a cabaret singer, but she never seemed to break into the mainstream. Contrast her with today’s trans muses – the gorgeous Andreja Pejic, for example, who featured in one of David Bowie’s videos in 2013. Nothing surprising about that, you might say. Rock and roll has a long history of taking inspiration from exciting trans women. The difference now is that those women are more likely to be taken seriously elsewhere too. In 2015, trans women win awards. We grace magazine covers. Pejic recently had her face splashed across New York advertising Make Up For Ever. They sell it in Debenhams. Trans can no longer be dismissed as a subculture.

There’s still a definite feel of community about it though. When Holly fell ill with cancer, her friend Penny Arcade, the performance artist, set up a funding page to raise money for her healthcare. More than 1,200 people donated over $68,000. It’s a moving sign of how much she was loved. She was with Joe Dallessandro when she died, her one-time Warhol co-star. It’s sweet to know they remained friends for all those years, but I couldn’t help but feel sad when I read she died without any remaining relatives. Maybe she didn’t want to marry and have kids – but even if she did, few trans women of her generation could have dreamed of enjoying such things. Holly represented an exciting but sad time for trans people.

As someone who’s spent more of my life in the 21st century than the 20th, it’s curious to see a former era slowly dying off. Whitney. Thatcher. Cilla. Whether national villains or global divas, the well-known faces that once shaped our world are waving goodbye, one by one. Holly’s legend will live on, but I hope the struggles she faced – and many trans folk still do – become ancient history. Soon.