For more of this story see the NY Daily News

Grieving mother Delores Nettles was on her way home a couple of weeks ago when she saw the man she says pummeled and killed her transgender daughter, Islan.
Paris Wilson, 20, was yucking it up on his phone near 125th St. between Fifth and Madison Aves., the mother said.

He walked right past her without saying a word.
“He didn’t even know who I was,” said the devastated Nettles. It disgusts her to think of how Wilson is such a huge and uninvited part of her life — and how insignificant she is to him.
“He seemed happy. Laughing and smiling. It aggravated me to see him walking the streets.”

Nettles was flanked by at least 100 protesters who rallied outside of police headquarters Thursday and demanded a resolution to the grisly murder case.

Wilson had catcalled Islan, 21, on Aug. 17, but became enraged when he found out she was transgender. The bigoted brute knocked her down and landed a spate of haymakers while Islan lay helpless on the street. The young woman was rushed to Harlem Hospital, where she later died.
Wilson was charged before Islan died and faced misdemeanor assault. After the collar, another man turned himself in to police and confessed to the crime, saying he was too drunk to remember the events.
That man had not been arrested and Wilson’s case was older than 90 days –meaning the speedy trial clock had expired. Wilson’s misdemeanor charge was thrown out and He became — at least temporarily — a free man.

NYPD officials say the investigation is still active. Officials for the District Attorney’s Office declined to comment.
But law enforcement sources said there has been slight progress on the case.

Nettles feels nothing if not slighted. She says she has cried herself to sleep every night since her daughter’s murder. She rests briefly, and then her eyes shoot open and she paces around her home. Her daughter is gone and her murderer walks free.
“I’m still waiting for justice,” Nettles said. 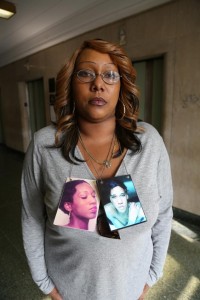