See More at the NY Times 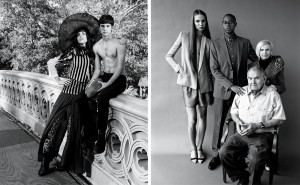 Arin Andrews and Katie Hill do not look out of place in the new Barneys New York campaign. Both have nonexistent hips, are right in the ballpark of six feet tall and aren’t yet old enough for a legal drink. But there’s one marked difference between them and the models you ordinarily see on runways and in the pages of Vogue and Elle: Mr. Andrews, 17, was born a girl, and Ms. Hill, 19, a boy.

They are just two of nearly 20 transgender models photographed by Bruce Weber who will appear in the new Barneys catalog and magazine campaign, wearing clothes from designers like Ann Demeulemeester, Balenciaga, Lanvin and Manolo Blahnik.

Alongside photographs of the subjects, many taken with family members, pets and other members of their support networks, the catalog also features excerpts from interviews with the participants by the journalist Patricia Bosworth, a contributing editor at Vanity Fair and the biographer of Diane Arbus.

Ranging in age from 17 to “early 30s,” their races, socioeconomic positions and places on the transgender spectrum vary.

Gisele Xtravaganza is Hispanic and grew up in the Bronx. Max Neu, who is white, is from Hamburg, Germany.

Some, like Ms. Hill and Valentijn de Hingh, a 23-year-old transgender woman from Amsterdam who has already done a handful of modeling gigs for brands like Maison Martin Margiela and Comme des Garçons, have fully transitioned and undergone gender reassignment surgery.

Others, like Ryley Pogensky, a party promoter who was born female and now identifies as “gender queer,” have not.

As he puts it in the catalog: “What is between my legs is not thoroughly who I am. If gender is black and white, I’m gray.”

The idea for the campaign was hatched by Dennis Freedman, who is in charge of Barneys ad campaigns and was formerly the creative director of W magazine, where he oversaw envelope-pushing features that included showing the designer Tom Ford with sex toys and Brad Pitt nearly naked.

In an interview, Mr. Freedman said that the campaign was a chance to create awareness of a community that has in many ways been left behind as gay men and lesbians have moved further and further into the mainstream.

“I was exquisitely aware that in the last decade, the L.G.B. communities have made extraordinary advances, and the transgender community has not shared in that progress,” Mr. Freedman said.

The fashion world has not been terribly quick to embrace transgender people in imagery, although there are exceptions.

In 2007, Carine Roitfeld put Andre J., an African-American party promoter with an ample beard, legs for days and a penchant for slinky dresses, on the cover of French Vogue. In 2010, Riccardo Tisci of Givenchy cast Lea T, a transgender Brazilian model, in its ad campaign along with several other non-transgender models. And since 2009, Luis Venegas has published Candy, which bills itself as a “transversal style magazine” and is published twice a year. (One issue had James Franco in drag, photographed by Terry Richardson. Another had the transgender performer Connie Fleming as Michelle Obama.)

Mr. Venegas called the decision by Barneys to do an entire campaign devoted to transgender people, many of them nonmodels, “big news.”

He also applauded the decision to have the campaign shot by Mr. Weber, who is perhaps the pre-eminent all-American fashion photographer, having worked with Calvin Klein, Ralph Lauren and Abercrombie & Fitch, saying it sends a powerful message.

“He makes things look healthy and beautiful,” Mr. Venegas said. “There’s no darkness in his images. Everything is a safe place where nothing goes wrong.”

None of the models appear to be complaining. Ms. de Hingh said, “In this capitalist consumerist society, things only become acceptable when they become marketable.” The campaign, she added, “was done so honestly and so beautifully and with so much integrity. It’s a really important, big project.”