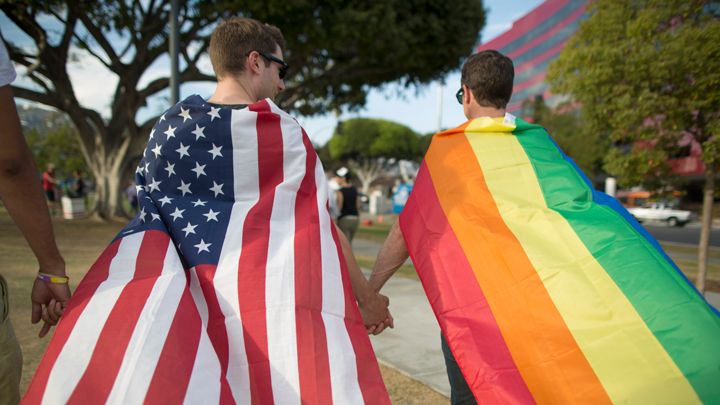 Two months after hearing oral arguments in Obergefell v. Hodges, the Supreme Court ruled 5 to 4 in favor of marriage equality Friday morning, enshrining into law the “fundamental right to marry” for same-sex couples across the country. It was a landmark decision that the LGBT community and its allies spent decades fighting for and that many feared would never come.

But while marriage equality supporters spent Pride weekend rejoicing with rainbow-tinted Facebook avatars and joyous tweets proclaiming that #LoveWins, the road to full equality remains long, and there are still many serious issues facing the LGBT community. Here are four issues LGBT activists and allies can — and should — address now that marriage equality has been achieved.

1. Violence
Lesbian, gay and transgender people, especially those of color, experience violence at disproportionately high rates compared to straight cisgender people. According to the FBI, bias against sexual orientation and gender identity accounted for more than 21 percent of hate crimes reported in 2013, with sexuality the second most common single-bias category following race. Moreover, the National Coalition of Anti-Violence Programs found that while transgender survivors and victims represented only 19 percent of anti-LGBT violence reported to the organization, transgender women of color accounted for 50 percent of homicide victims. Seven transgender women of color were murdered in the United States during January and February alone of this year; as the Southern Poverty Law Center has pointed out, that’s nearly a murder a week.

2. Employment discrimination
A 2013 Pew Research Center survey found that 21 percent of the LGBT adults surveyed said their employer treated them unfairly because of their sexuality or gender identity. Another report, authored the National Black Justice Coalition and other groups, found that nearly 50 percent of black LGBT people have experienced employment discrimination. Rates are significantly higher for transgender workers — some 90 percent of trans people have reported experiencing on-the-job harassment or mistreatment, while 47 percent said they were fired, not hired or denied a promotion because of their gender identity, according to a national survey.

While 22 states have passed laws making job discrimination due to sexual orientation illegal — 19 also include gender identity — LGBT workers still lack federal protection. The Employment Non-Discrimination Act, or ENDA, has been introduced in nearly every Congress since 1994, but the hotly contested federal bill didn’t make any headway until 2013, when the Senate for the first time passed the legislation. Still, it failed to make it to the president’s desk.

4. Health care
Social and systematic discrimination, as well as inadequate health care access, contribute to health disparities for the LGBT community. According the Fenway Institute, LGBT people are more likely than straight people to report unmet health needs and have difficulty accessing care and obtaining insurance, which leads to higher rates of disease, chronic illness, drug use, mental illness and obesity among the population. These disparities are exacerbated for the transgender community. The Transgender Law Center found that, in the private market, the pervasiveness of gender identity discrimination in insurance, denial of insurance coverage and transgender-related health care exclusions keep transgender and gender non-conforming people from accessing medically necessary care such as mental health services, surgery and hormone therapy.