In Mongolia, transgender people face extreme violence and discrimination, much of which goes unreported because the law does not protect them. Out of fear, many stay in the closet. Photographer Álvaro Laiz spent three and a half months in 2011 photographing male-to-female transgender people in Mongolia to explore notions of identity in a place where they are forced to hide who they are. “They cannot express themselves normally except in certain places. Your life becomes a scenario in which you are pretending to be someone else. Your job, your relatives become part of this performance, and little space is left to act as you would really want to be. It is insane,” he said via email.

Since 2008, Laiz’s work has focused on marginalized and repressed groups, including HIV orphans in Uganda and ex–child soldiers from Joseph Kony’s Lord’s Resistance Army. Laiz arrived in Mongolia by chance but quickly became interested in how LGBT Mongolians fare in a society that leaves almost no room for sexual or gender diversity. “I’m not a war photographer, so I have a limited experience in terms of ethnic violence or open conflicts. But what I can tell you is that this kind of repression is as cruel as the ones that arise during conflict,” Laiz said. 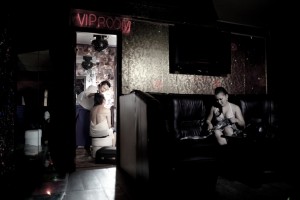 After doing research through NGOs and other organizations, Laiz located several subjects who gave him access to their lives. Some worked in nightclubs or as prostitutes and could only reveal their identities in those realms. Others were ballet dancers, social workers, tour guides, and teachers who presented as men in their work environments. Laiz also photographed his subjects in traditional Mongolian queen costumes as part of a more lyrical, less documentary-style aspect of his project. “I wanted to show how they are, but also how they see themselves. Identity isn’t a one-way concept but a fluent mixture of influences, both internal and external, which forms the way we face the world,” Laiz said.

There are signs that conditions may improve for transgender Mongolians. In 2009, the first LGBT rights organization in the country, Mongolia LGBT Centre, was finally registered as an NGO. Last year, Mongolia celebrated its first Pride Week. “One bright side is that the Mongolian society is young and we believe that we can change the attitude of the public slowly through educating the younger generation about human rights principles, democratic values and tolerant, forgiving human nature,” the organization’s executive director, Otgonbaatar Tsedendemberel, told Gay Star News.

Many of Laiz’s subjects have left Mongolia for nearby countries where transgender people can live in more safety and freedom. But Laiz believes that things may be changing for the better in Mongolia. He’s hopeful that his photographs are part of the force that may one day make the country hospitable for transgender people. “What I wanted to do was to take the viewer to a place far away from prejudice,” Laiz said. “The viewer must understand that these people are nothing but human beings who are trying to live their lives. There is nothing wrong with it.”

See more of this at Slate.com