WHEN Bianca and Nick Bowser’s young sons get older they will sit them down and drop a bombshell.

Bianca, the woman who Kai, three, and Pax, who is nearly one, have always known as their mother, is ­actually their dad.

And Nick, the man they believe to be their father, is the mother who gave birth to them.

The couple know the revelation will be nothing less than mindblowing to their children.

But they insist the boys will be fine – because their upbringing will be loving, supportive and secure.

The facts are these: Bianca, 32, was born and brought up as a boy called Jason and Nick, 27, as a girl called Nicole.

They are a transgender couple but still have their original sex organs because they cannot afford reconstructive surgery.

Bianca said: “The kids currently have no idea. It’s not like strangers ever guess in restaurants or at the shops.

“I don’t know when we will tell them, maybe when Kai is about six. But they will need to be old enough to understand.

“It is important they know because it’s a big secret to keep from your children and if they found out another way they could hold huge resentment.

But I don’t worry about how they’ll react. We will not treat it as a bad thing. And kids are accepting and non-judgmental.”

In a perfect world, everyone would agree. But Bianca and Nick, who live in the US state of Kentucky and married in November 2011, know only too well that many people see their life as abnormal.

They are choosing to talk about their unusual situation now to raise awareness.

Nick has taken testosterone to help change his appearance and had surgery to remove his breasts.

Bianca had breast augmentation and laser hair removal but didn’t need female hormones because she naturally looks and sounds feminine.

As Bianca says, most strangers don’t guess they are not biologically as they appear to be – so they don’t get hassled.

But when bar manager Nick was pregnant, his biological gender was obvious and the baby bumps prompted aggressive stares and nasty comments from some.

He said: “My pregnancy was not the norm for a lot of people and so they stared. I couldn’t handle the whispering and pointing and, by the time of the third trimester, I couldn’t leave the house.

“I only left for doctor’s appointments. People are afraid of what they don’t understand.”

It might have been easier for Nick to give up his male clothes and hairstyle for the duration but Bianca says that was never an option. She explained: “He hasn’t worn women’s clothes since high school.

“Nine months was not going to force him to do it.

“And our friends and family were happy for us – happy to be having grandchildren and nephews.”

For Nick, there another struggle to face. Going through the most female of all experiences was a nightmare for him.

He said: “My brain has always told me I was a boy.

“I decided to carry our sons because we wanted our children to be ours, but being pregnant made me absolutely miserable. It was a daily struggle.

“I hated the way my body was changing. It did not match my inner feelings.”

Unable to bear the thought of natural birth, Nick opted for a Caesarean section. He said: “It cut out part of the very female process of giving birth.”

Bianca didn’t mind that she was unable to experience that part of being female.

She said: “I was very happy not to carry the children – the inconvenience, the physical changes, the pain of birth.”

Bianca grew up as Jason in a religious family in a small town in Georgia and struggled to understand why she felt different from the age of five.

“It’s not that I hated Action Men and played with Barbies, although I didn’t like rough play,” she said.

“But I was always more comfortable with girls and my mannerisms were feminine. Initially, I thought I was gay and came out at 17. I didn’t know at that point it was possible to change gender.

“But when I was on the gay scene I met transgender people for the first time. It was like an epiphany.”

She began therapy and wearing women’s clothes full-time. “It was scary,” she admitted. “It was like going through puberty again, but I never kept it secret.”

Bianca’s family struggled to accept the change, just as they had her coming out as gay. Although they now accept her as a woman, she admits it took them a while to refer to her as Bianca and “she”.

Nick, also from Georgia, assumed he was gay in the same way and he came out as a lesbian at the age of 17. But deep down he knew there was more to his feelings and he began to dress like a boy.

“When I came out as a lesbian I could dress like a guy, have short hair, and date girls. But it took me another four years to learn what being transgender was.”

It was meeting Bianca in the bar where she worked as an entertainer in 2009 that gave him the courage to become a man.

“He was still Nicole but looked very butch and that attracted me,” said Bianca. “A few months later we got together and he spoke to me about making the transition. He started binding his breasts for the first time.

“It was frightening for him worrying about whether his family would accept him. That’s still a grey area – but it’s getting better.”

Bianca says that although they dislike still having their biological genitalia, having sex has never been a problem.

“We have the parts so we will use them,” she said. “If we could change them,we would and they would be the other way around – but we cannot afford it and the children come first.”

Bianca does admit that she felt a stab of envy at the bond Nick might be developing with the boys while carrying them. But Nick says it was actually a struggle.

He admitted: “For me even the births, having them taken out of me, did not emotionally affect me. It took weeks for me to build an attachment.” 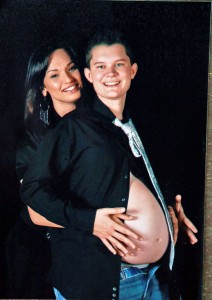 When Kai was born, medical staff assumed they were a lesbian couple. And the reaction when Bianca tried to sign in the box for “father” was crushing.

“They didn’t believe it until they had seen the paperwork,” she said. “I had to fight and it did upset me.”

But despite the documentation, Bianca has never felt anything but a mum.

She said: “Nick is their dad. It’s not that I do more maternal things – we share everything as parents – but the kids call me mum and Nick dad.”

The pair say they won’t have any more children. But only because the two they already have are a handful.

“Having them is what I always wanted. I just didn’t dream I would find anyone to do it with me.”