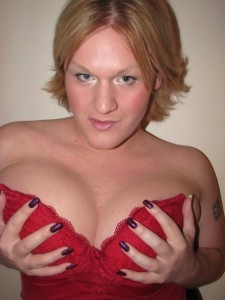 A transsexual encouraged to have a £10,000 sex change by Katie Price is calling for the NHS to cough up £14,000 – so she can become a man again. Chelsea Attonley, 30, who was born a boy called Matthew want taxpayers to foot the bill moaning that being a woman is too “exhausting.”

After struggled with her identity while growing up and he became a drag queen called Miss Malibu. He became depressed when a doctor rejected his initial bid for a sex change. But then Chelsea – who mimicked Katie aka Jordan’s style by wearing a blonde wig, miniskirts and stilettos – had a chance meeting with the lads’ mag favourite in a nightclub in 2007. She urged him: “You have got to go for it.”

Katie Price’s words of assurance gave him strength to return to his GP and insist on gender reassignment surgery at a bank-busting cost of £10,000. But now, seven years after his momentous decision to become a woman, Chelsea wants to go back to being a man – with the taxpayer footing the bill. Chelsea, who lives on welfare benefits, told Closer magazine she finds dressing and acting as a girl “exhausting” and feels she has never been accepted as a real woman.

She wants a breast reduction on the NHS and painful gender reassignment surgery to give her back a penis at a total cost of £14,000. The TaxPayers’ Alliance (TPA) says the NHS should not pay out again. TPA research director Alex Wild said: “The NHS must prioritise crucial frontline services over ridiculous vanity operations. This whole saga has simply cost far too much. If the Health Service is to be properly funded, this sort of waste must be cut out.”

Chelsea, originally from Chesterfield, Derbyshire, but now living in London, said: “I have always longed to be a woman, but no amount of surgery can give me an actual female body and I feel like I am living a lie. It is exhausting putting on make-up and wearing heels all the time. Even then I don’t feel I look like a proper woman. I suffered from depression and anxiety as a result of the hormones too. I have realised it would be easier to stop fighting the way I look naturally and accept that I was born a man physically.”

Chelsea, changed her name by deed poll from Matthew in 2008 after a £5,000 boob job, says she does not feel guilty about asking the taxpayer to pay for a reverse operation. She added: “Now I have decided I want to live as Matthew, I am desperate to have my FF-cup boobs removed.

“I can’t afford to have them done privately, so I am hoping to have the op on the NHS. I can’t work at the moment because I am too upset after what I have been through. I am considering having penis reconstruction too. I don’t feel bad about the NHS paying for the surgery as I don’t consider it a choice. I need to have these operations for the sake of my mental health. I am lucky enough to live in a country where there is free health care.”

Chelsea has already had testosterone injections to begin her transition to becoming a man again. She added: “If people criticise me for wanting treatment on the NHS, it does not bother me. I know I need these changes to make me happy and no one should deny me that.”