Futurist, pharma tycoon, satellite entrepreneur, philosopher. Martine Rothblatt, the highest-paid female executive in America, was born male. But that is far from the thing that defines her. Just ask her wife. Then ask the robot version of her wife. 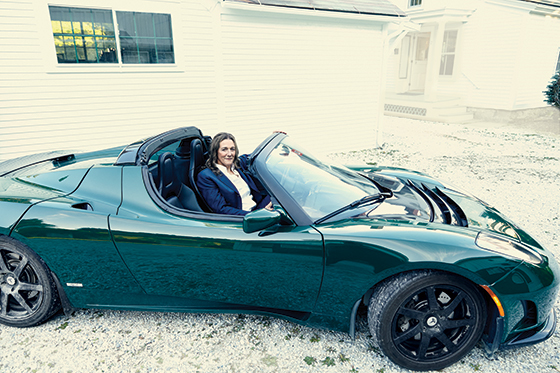 Only about 5 percent of the companies in the Fortune 500 are run by women; double the sample size, and the proportion is the same. Compensation levels for female CEOs appear to lag as well, though it’s hard to tell because there are so few of them. On a recent list of America’s 200 highest-paid CEOs, only 11 were women, and their median pay was $1.6 million less than their male peers. Certain of these women are already household names: Yahoo’s Marissa Mayer, No. 34 on the list, who earned $25 million last year, and Hewlett-Packard’s Meg Whitman, No. 95, who earned $18 million. But the highest-paid female CEO in America is not nearly as well known. She is Martine Rothblatt, the 59-year-old founder of United Therapeutics—a publicly traded, Silver Spring, Maryland–based pharmaceutical company—who made a previous fortune as a founder of Sirius radio, a field she entered as an attorney specializing in the law of space. But what’s really extraordinary about Rothblatt’s ascent is not that she has leaned in, or out, or had any particular thoughts about having it all. What sets Rothblatt apart from the other women on the list is that she—who earned $38 million last year—was born male.

“It’s like winning the lottery,” Rothblatt said happily, about seeing her name atop the list, during one of the meetings I had with her this summer. But Rothblatt could not be less interested in establishing herself as a role model for women. “I can’t claim that what I have achieved is equivalent to what a woman has achieved. For the first half of my life, I was male,” she said.

In person, Martine is magnificent, like a tall lanky teenage boy with breasts. She wears no makeup or jewelry, and she inhabits her muted clothing—cargo pants, a T-shirt, a floppy button-down thrown on top—in the youthful, offhand way of the tech elite. Martine is transgender, a power trans, which makes her an even rarer species in the corporate jungle than a female CEO. And she seems genuinely to revel in her self-built in-betweenness. Just after her sex-reassignment surgery in 1994, her appearance was more feminine than it is today—old photos show her wearing lipstick, her long, curly hair loose about her shoulders. But in the years since she has developed her own unisexual style. She is a person for whom gender matters enough to have undergone radical surgery, but not enough to care whether she’s called he or she by people, like her 83-year-old mother, who occasionally lose track of which pronoun to use.

What she prefers to be called is “Martine.” To her four young grandchildren she is “Grand Martine.” Bina Aspen, the woman who married Martine 33 years ago, when Martine was a man, and remains her devoted wife, calls herself not straight or gay but “Martine-sexual”—as in the only person she wants to have sex with is Martine. Together Martine and Bina have four children, and they refer to Martine as “Martine” in conversations with strangers. At home, they call her “Dad.”

In 1995, just after her transition, Martine published The Apartheid of Sex, a slim manifesto that insisted on an overhaul of “dimorphic” (her word) gender categories. “There are five billion people in the world and five billion unique sexual identities,” she wrote. “Genitals are as irrelevant to one’s role in society as skin tone. Hence, the legal division of people into males and females is as wrong as the legal division of people into black and white races.” Instead, she suggested, people might better express their gender and sexual identities on a spectrum, perhaps in terms of color: Green might be “an equally aggressive/nurturing person who does not try to appear sexy” (lime green someone a little less aggressive), and purple someone gentle, nourishing, and erotic in equal measure.

See much more with the full article at NY Magazine.