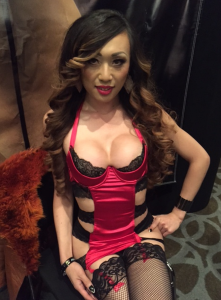 “I see people who look at me [in my booth] and just walk away,” Lux told the Daily Dot. “And then there are people who see my DVDs, then look at me back and forth and say, ‘No. You’re transsexual?’ [The response] varies.” As to those who fall into the former group: “I think people are coming in groups, so if one guy likes us, they don’t want their friends to know about it.”

This year, Venus is nominated for Adult Video News (AVN) Awards for Best Transsexual Performers of the Year and Best Transsexual Sex Scene, for a scene she did with mainstream performer Dana Vespoli. (Unlike the majority of TS performers, who predominantly work with male or TS performers, Lux works with mainstream female performers.) But even though she is nominated for two of the most prestigious awards in her industry, Venus says she was rejected from other companies’ booths at the Adult Entertainment Expo. Hers is the only TS booth at AEE.

“I thought, I’m gonna make something happen for us girls to have a place to sign and say, ‘Look, we’re a niche genre but we’re still beautiful women. We just have something extra,’” she says. “The industry and the general public are not open about that.”

That said, there is still a huge divide between the TS side of the industry and the “mainstream” side of the industry. The biggest studios with the most money, such as Digital Playground, do not shoot TS films (though large studios like Evil Angel, which shot Lux’s scene with Vespoli, do), and mainstream male performers who work with TS performers, or “crossover” performers, are often shunned by the rest of the industry, who view them as vectors of sexually transmitted disease.

Although TS performers are represented in a handful of categories at the AVNs, many did not have the opportunity to walk the red carpet or accept their awards onstage until 2012, when TS performers held a meeting with AVN to protest their shoddy treatment during the ceremony.

“AVN has long recognized the transsexual niche as an important and lucrative market segment and if there was more to be done to support the community, we wanted to hear directly from the performers how we could recognize their efforts on a bigger stage,” the trade publication wrote.

But Lux still thinks there’s plenty the industry can do to bring heightened visibility to her fellow TS performers. “We do not get interviewed at all on the red carpet by the Playboys, the HBOs,” she says. Compared to porn’s biggest names employed by the biggest studios, TS performers are not considered “a marketable product that [the media] can advertise freely.”

“We’re a good selling point,” she says. “They look at us as humans one day, and the next day it’s ‘Whip it out, I need you to come hard.’ Until there’s a transgender woman who owns a production company, who has a voice in the transsexual community, it’s gonna be male-dominated and we’ll be absorbed. And we won’t have a voice of our own.”

See more at The Daily Dot