BROOKLYN, N.Y. (WABC) —
The NYPD has released new video showing suspects in a vicious attack that left a transgender woman who is now fighting for her life. 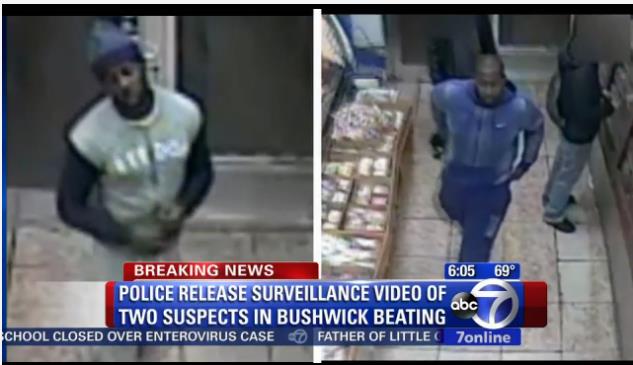 Police are looking for four men and said they are investigating the attack as a bias crime.

“It’s really saddening to hear about that, that it would happen to someone,” said Melissa Sbrocco, a Bushwick resident. Sbrocco said it’s outrageous and unnerving that the victim was attacked on her doorstep in Bushwick. “It’s is a little scary thinking about it now, being this open and in this open of an area,” Sbrocco said.
At 11:30 Sunday night, a transgender woman, walking with her gay, male friend on Bushwick Avenue was confronted and attacked by four men.

They punched and kicked the victim, 28, then one suspect threw a Plexiglas board at her, striking the victim in the head. The suspects also made anti-gay statements, police said. The victim was taken to Elmhurst hospital, where she remains in critical condition. There have been no arrests.

Gay, lesbian and transgender rights activists say there is no doubt about what motivated the attack. “I think it’s very clear that this was an attack because she was a transgender woman. The nature of the slurs against her and the fact that the fight did not escalate to physical violence until they realized she was transgender indicate that this was a hate crime,” said Kate Barnhart, of New Alternatives for Homeless LGBT Youth. The LGBT community held a rally in support of the victim Tuesday night.

The victim remains in critical condition at Elmhurst Hospital as police search for the four men who brutally attacked her. The victim did suffer a traumatic brain injury. She underwent surgery and had to have a portion of her skull removed to allow her brain to swell without causing further damage. The victim has not yet been identified. Her friend managed to escape without injury.

Now, we’re hearing for the first time from another victim of a bias attack that happened just a few blocks away and a few weeks ago. “There was a group of boys that starting making comments like *expletive*, tranny, gay, all of these derogatory terms,” the victim said.

Eyewitness News agreed to hide the 22-year-old shooting victim’s identity, because he fears the three men who police arrested and charged. “Two years ago, I got jumped. Four months ago, I got stabbed. Two months later, I got shot,” the victim said. “I identify myself in any way possible. Today, I can be a guy. Tomorrow, I can be a girl.”

The rash of violence has the LGBT community pushing for peace with a plea for tolerance.
“Every attack, every murder, the whole purpose is to keep us silent, to keep us from transitioning, and they’re very effective,” said Brooke Cerda, a transgendered woman.

Anyone with information about the case is asked to call 1-800-577-TIPS (8477), submit tips by logging onto the Crime Stoppers website at WWW.NYPDCRIMESTOPPERS.COM, or text tips to 274637 (CRIMES) then enter TIP577.